Inside Jessica Simpson’s First Days As A New Mom (Photo) 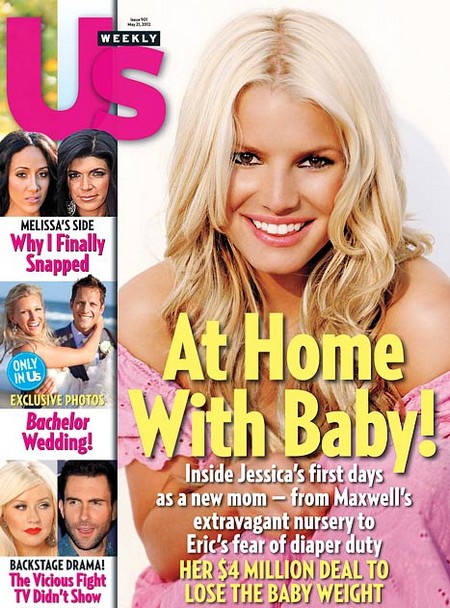 The current issue of US Weekly features the cover story ‘Jessica Simpson – At Home With Her Baby.’  The magazine claims to have all the details of Jessica Simpson’s first days as a new Mom to new daughter Maxwell.  Jessica gave birth to her first child, a daughter named Maxwell Drew, over a week ago.  US is going to take us into Maxwell’s extravagant over the top nursery and let us in on the scoop of how her fiance Eric Johnson is afraid to be assigned diaper duty.

While Jessica has remained silent about how she and her new family are doing until now, Jessica has revealed she is besotted with her little girl.  She tweeted: “I am so in love with baby Maxwell. I want to cry every time I look at her.”

Jessica has found success in the music industry as well as television and film market but she admitted becoming a parent by far outweighs her previous fortune.  She added: “Motherhood is by far the best thing I’ve ever experienced.”

US reports: And, as Simpson recuperated at the hospital after Maxwell’s arrival, her maternal instincts kicked in — and then some!  “Everyone is marveling at what a natural Jessica is.  She was born to be a mom!”

Also included in this week’s issue the magazine has all the details of the backstage drama on The Voice.  They have the dirt on the vicious fight Adam Levine and Christina Aguilera had that The Voice did not air.  The two reportedly had a shocking verbal brawl with Adam calling Christina some terrible swear words!

To find out all about Jessica, her over the top nursery and more – pick up the current issue of US on stands Friday!