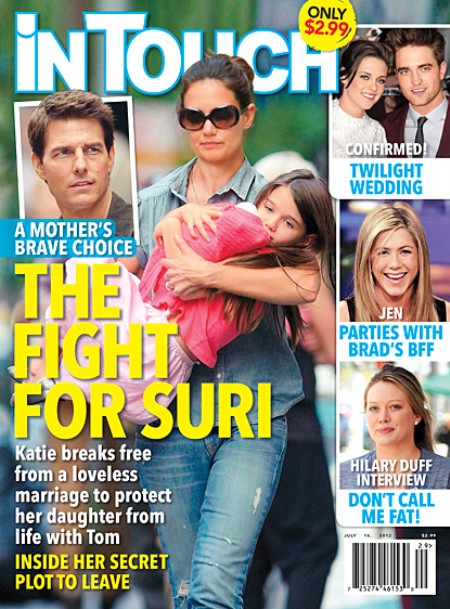 In Touch Weekly’s cover story is filling our gluttonous fascination with Katie Holmes’ calculated and brave escape from her couch jumping, Scientology-following husband, Tom Cruise. The Dawson’s Creek star put her acting skills to work and remained a devoted wife to Tom, even being pictured holding his hand two weeks before the final blow, before pulling the rug from under him and announcing her intention to take daughter Suri Cruise with her.

The magazine said it was telling that Katie chose to take Suri to see the new Pixar movie, Brave, just days before the divorce announcement. The movie is about a princess who breaks from tradition to live the life she wants to live, without constraints and royal pressures. Sounds pretty familiar! Replace the princes and royal demands with actors and a scary, sci-Fi religion and it’s almost like life imitating art!

Only her close family knew about Katie’s secret plot and even helped orchestrate it. Her father, Martin Holmes, has been by Katie’s side in NYC and was in charge of the backhand deals that Katie maneuvered without Tom even knowing. Martin is an attorney and he helped her rehire her old representation, file the divorce papers in New York and fired the people Tom had requested surround Katie when he wasn’t there.

But will it be enough? In Touch says all of Katie’s actions were taken to protect Suri from a life of Scientology with Tom. She was frightened he wanted to ship her off to some brainwashing Scientology school where Katie’s influence over Suri would grow weaker and weaker. We’ll have to check out the magazine to see if Katie’s stealth decisions floored Tom as much as people think and if she’s done all the right things so far to ensure she gets sole custody of her daughter.