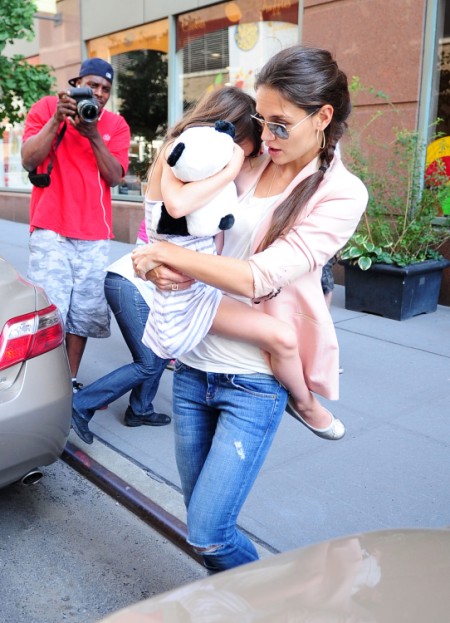 Katie Holmes was so afraid of Tom Cruise’s determination to send their young daughter to a military-like Scientology boarding school, she finally decided to make a run for it, and as more news concerning Sea Organization emerges, we find that she made the right decision.

Thanks to Scientology defectors who have been bolstered by Katie’s recent strong and stealthy actions, we’re getting an inside look at the kinds of questions the children who attend this pricey school are asked. Described as similar to a “boot camp”, questions from the “Children’s Security Check, Ages 6-12” include:

HAVE you ever thought someone was crazy?

HAVE you ever decided, ‘Someday, when I’m grown up, I’ll get even’? If so, with whom?

HAVE you ever gotten yourself dirty on purpose?

HAVE you ever refused to eat just to worry someone?

HAVE you ever been mean, or cruel, to an animal, bird or fish?

DO you have a secret?

HAVE you ever felt ashamed of your parents?

HAVE you ever done something to your body that you shouldn’t have?

WHO have you made guilty?

HAVE you ever been a coward?

HAVE you ever spied on anyone?

HAVE you ever thought someone was crazy?

Sick, right? How could you ask a child those questions? What’s to be gained? Secrets? Something to hold over them? Confessions that make them feel horrible about themselves?

The UK’s Sun interviewed a defector who was at Sea Org when he was 16. “I was exposed to things I’ll never be able to erase from my mind. Our idea of what was happening in the real world was severely warped,” Marc Headley said. He quit the church eight years later.

This is the kind of information that needs to keep coming out. All of Katie’s moves so far have been well planned and well executed. She had surprise on her side and, without saying a word, is letting news agencies and other people bash Scientology, which can only help her chances of getting sole custody. But she has to stay sharp because Tom’s going to come at her with all his money and all his power. This is going to turn into a denouncement of Scientology. It has to. Katie’s only hope at keeping Suri is to make Tom and Scientology look crazy. She doesn’t need to do a lot, as evidenced by the media blitz. But when Tom starts to play dirty – which is inevitable – will Katie speak up about what she’s seen and get a little dirty too?

How far would you go if you saw this in store for your child?