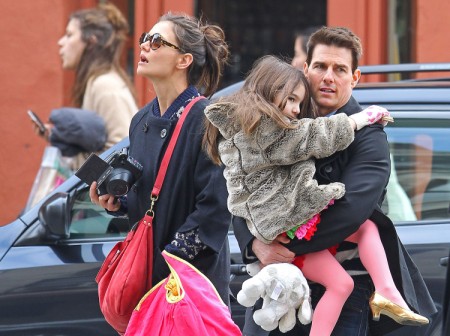 More news keeps shuffling in over Katie Holmes and Tom Cruise’s divorce but Scientology, and Suri Cruise’s place in it, continue to be the most logical reasons why Katie planned her escape.

Sources close to Katie are saying that Tom’s decision to ship Suri off to Scientology school was the main reason she got those running shoes ready. CDL already reported that Katie had become wary of Suri’s involvement in the secretive, and head-scratching religion. Apparently, the six-year-old is at an age where she will be encouraged to be more involved in the church and Tom was gearing up to send her to Sea Organization. Sea Org is a place where Scientology is taught to kids who live there without their parents. Naturally Tom is a big fan of a place where Scientology is force fed for breakfast, lunch and dinner.

But this is no summer camp. TMZ reports, “The Sea Org has been often compared to a boot camp and several ex-Scientologists (including Oscar winner Paul Haggis) have been outspoken against its military-like conditions.”

This is really shaping up into a sequel to the Sally Fields movie, Not Without My Daughter. On one hand I applaud Katie for her strength and proactive and sneaky nature to finally pull the plug on Tom, but I have to wonder why she put herself into this situation to begin with. He was just as bat sh-t crazy six years ago as he is now. She had to have known by looking at his kids with Nicole Kidman that he wanted their spawn to be raised cuckoo too. So why now? If we believe this source then the idea of Suri being taken away from her was too much. Maybe she thought she could contain the crazy if Suri was by her side most of the time? I’ve seen A LOT of pictures of that kid. There’s no containing her!

I’m still so confused by this whole situation. Aren’t you? Luckily for us, I think much more is going to come out of the woodwork. Scientologists must be freaking out right now. Kirstie Alley’s doing some stress eating and Lisa Marie Presley is giddy with joy. The fight for Little Xenu might just bring this quasi-church to its knees!