Katie Holmes Divorcing Tom Cruise To Get Suri Out Of Scientology 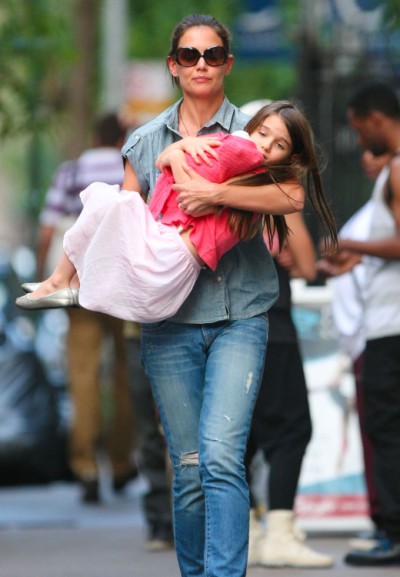 New reports are linking Katie Holmes and Tom Cruise’s divorce over the fact that Katie wants daughter Suri Cruise safely out of the hands of Scientology.

TMZ’s sources said Suri is apparently at the age when she would get more involved in the church. I wish I could tell you more about the involvement, but I quit reading Dianetics after the second page because I’m not crazy. TMZ wrote, “Katie has never been fully committed to Scientology, even though she has had ties with the church. We’re told the couple had been arguing over Suri — that she’s now of the age where Scientology becomes a significant part of her life.”

The article said the highly secretive religion is just one of the reasons Katie pulled the plug, but it’s the dominant one. There’s still the chance Tommy’s crying on the chest of his Oblivion co-star, but I have a feeling Scientology was the deal breaker. Lainey Gossip also reported that Katie didn’t want to be spied on anymore. And Scientology is well known for keeping tight tabs on its followers. If you’ve got some time, check out The New Yorker piece by ex-Scientologist and Oscar-winner, Paul Haggis. It’s amazingly insightful. And, if anything, it will give you an idea of what Katie’s up against. Tom is not going to let little Xenu go without a fight. He wants that child raised in Scientology like his two adopted children with Nicole Kidman. Remember, he got those kids to live with him full-time after he divorced Nicole. He’ll try the same with Katie.

But Katie’s asking for SOLE custody from a father that isn’t an alcoholic, druggie or certifiably crazy (I know, I know, that’s debatable). Most people try to play nice with the joint idea at least. But she knows Suri has no chance if she stays with Tom. Have you seen pictures of that kid lately? That child is always pouting about this or crying about that. She’s horribly spoiled! Say what you want about Katie (and a lot of us have ever since she rode around on the back of Tom’s motorcycle) but she’s got balls to do this. Who knew there was light and fight behind those glassy eyes?