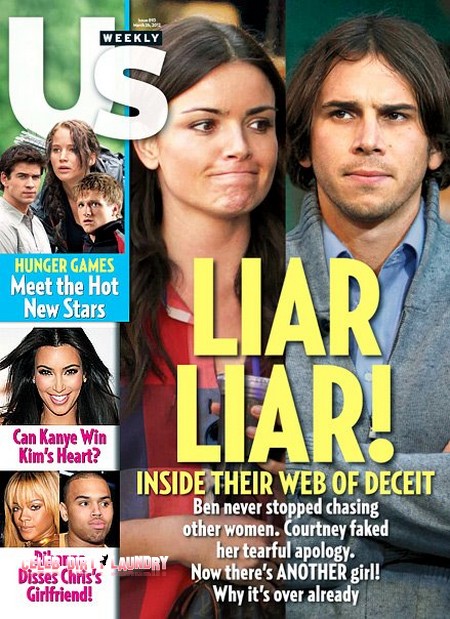 The March 26th, 2012 issue of Us Weekly features the cover story ‘Liar Liar! Inside Their Web Of Deceit.’  Now that the world knows that Bachelor Ben Flajnik chose Courtney Robertson over Lindzi (shockingly) the magazine is breaking the story of how their relationship is all a lie.  Not big news since everyone pretty much knows that.

US has all the details inside their web of deceit.  They claim Ben never stopped chasing other women and Courtney’s tearful apology was all fake.    No amount of real (or fake tears) can change the fact that this was TV, it’s was all a fairytale, and Courtney was a big, fat faker.  She wanted to ‘win’, and so she did.  This is the price she paid for it.

Ben had the chance, like the rest of America, to see the “real” Courtney Robertson. Which means, he has finally had a chance to see the nasty side of her that all the girls and the viewers did. The woman he thought Courtney was, was completely fake. Ben is now shocked that he fell in love with someone who manipulated him and tore apart the other women.

The magazine also goes on to claim there is another girl and Ben and Courtney’s relationship is over already.  Not hard to believe if you watched the After the final Rose Episode it seemed utterly awkward and uncomfortable between them.  What do you think, was this the most boring season of The Bachelor ever?  Sound out in the comments and let us know your thoughts!

Also included in this week’s issue with The Hunger Games about to hit theaters March 23rd, 2011 they are introducing us to the hot new stars. As Celeb Dirty Laundry reported this week Kim Kardashian‘s sister Khloe Kardashian thinks Kim and Kanye West would make a great couple.   Well the magazine has the scoop on whether Kim will be successful in winning Kanye’s heart.