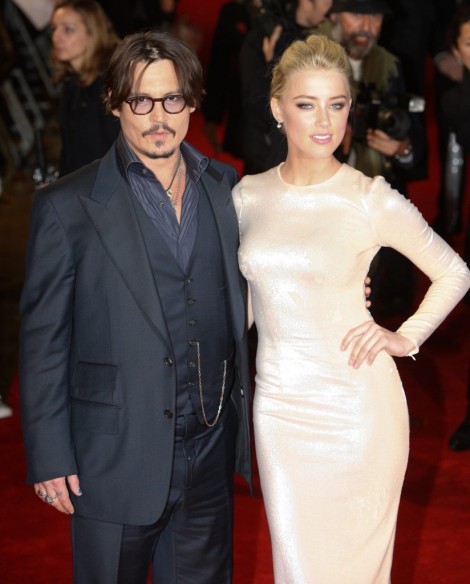 But sources are saying Amber Heard’s using Johnny Depp and that he’s getting way more attached than she is. That’s fine if both parties are on the same page. But are they? Johnny’s… fragile, right? He’s dealing with something – maybe a mid-life crisis. He just broke up with Vanessa Paradis after fourteen years. His oldest kid’s a teenager now. He’s looking rough. Johnny might say he’s into the casual thing but Star magazine begs to differ. Apparently he wants marriage but Amber’s still hooking up with her ex-girlfriend, Tasya van Ree, on the side.

“Johnny’s absolutely head over heels in love,” a friend told Star. “He wants to spend the rest of his life with Amber and make her a superstar. The problem for Johnny is that Amber is a free spirit who probably won’t stick around. You get the feeling that he’s much more into her than she’s into him.”

If you would have told me 5-10 years ago a C-list star was dicking Johnny around I would have told you to shut your face. But now… is it so out of left field? And as much as I am LOATHE to entertain Star as even remotely true, this does remind me of a story Lainey Gossip mentioned a couple weeks ago. Johnny and Amber were all over each other in a roped off section of a Hollywood club out in the open for everyone to see. Desperate or too infatuated to care that you’re one of the biggest stars in the world and should have some freaking dignity?

The point is that Johnny might have it pretty bad and he might be lonely and those do not make a good combination. Is it just me or is Johnny Depp turning into Michael Jackson – kinda waxy lookin’ with a Peter Pan thing going on? Maybe it’s the hats and scarves. Is Amber Heard using Johnny for a good time? Can you blame her? Maybe she senses the loneliness and is just helping him get through his blue period. I’m down with that. She just better tell him before he starts getting ideas….