Is Ben Affleck Only With Jennifer Garner Because Of Jennifer Lopez And Oscar? 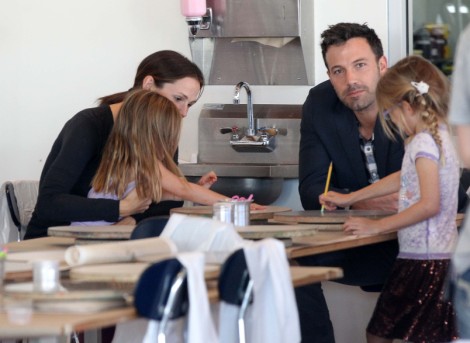 So Ben Affleck is campaigning for that Oscar pretty hard lately. A day can’t pass without seeing him papped taking his kids somewhere, smiling for the paparazzi or looking adoringly at his wife, Jennifer Garner. It doesn’t bother me. He wants Argo to do well come awards season and this is how it’s done. Fine. But then I read a Blind Item over the weekend that screamed the Garner-Afflecks and I had to wonder if this show of a happy, happy family has a lot less to do with a golden statue and a lot more to do with Jennifer Lopez.

The Blind Item reads: “Although you see her with their kids constantly, you don’t see him with the kids more than once a month… and he rarely looks happy about it. Lately though, he’s everywhere with them, and each moment has been captured on film. Why the sudden change? It’s all because of his famous ex. Given that he and his ex haven’t worked together in years, and given that he’s married, you would think that he’d be smart enough to stop talking about the ex. Nope. He’s been flapping his gums lately about how he’s been keeping in touch with her, and that has really ticked off his wife! So, even though he has a project to promote, he is now spending much of his time doing penance in the form of family outings: to the park, to the store, to the restaurant, to kiddy-friendly activities. Plus a romantic vacation with his wife. For each of these outings, the paparazzi are notified in advance, and each outing is captured on film with him posing as the dutiful father and husband. Well, except for the fact that he still looks absolutely miserable. We’d be willing to bet that, as a result of all this fun and togetherness, instances of him talking about his ex will be dramatically decreased in the future.”

So this is obviously about Ben and the Jens, right? Ben just gave a pretty candid interview to the Hollywood Reporter about how he’s still in contact with Jennifer Lopez. We all assumed it probably pissed Jennifer Garner off but I never thought she’d make him pay for it by staging family outings. She’s probably pissed about Ben’s Details interview too. In that he basically said Garner’s the real parent in the relationship and he’s not very present. Oh ya, he also talked about rumored piece on the side, Blake Lively, in that one as well.

I’m not saying Ben Affleck doesn’t love his wife or his family. He obviously does. I just think Ben is and always will be all about Ben, and most times Garner can handle it but other times, like when he embarrasses her in national publications, she makes him pay. It’s one thing to say you still talk to your exes and another to disrespect your children. Garner is wonder mom and she just wasn’t having it. Still… odd couple, right? I actually can’t believe they’ve lasted this long which is a shitty thing to say, but whatever. I think a lot of it has to do with the fact that Garner is infatuated with Ben and will do anything to make the relationship work – including massage his massive ego. So the fact that she’s pulling this paparazzi shit is OK with me. You know he hates it. It’s written all over his face. He’s not comfortable playing the family man. He’d much rather be sitting on a yacht somewhere stroking Lopez’s ass. But Garner’s got him by the balls on this one. He has to play along. Merit might win Argo an Oscar but Ben knows the chances only get slimmer if Garner isn’t playing the doting wife along the way.

Do you think the Blind Item is about Ben and the Jens? If not, who else could it be? Are you surprised Garner’s making Ben pay for his comments in this very public way? Regardless, I’m going to keep a sharper eye on Garner in the future. She comes across as a goody goody but there’s some crafty biotch in her. I like it!