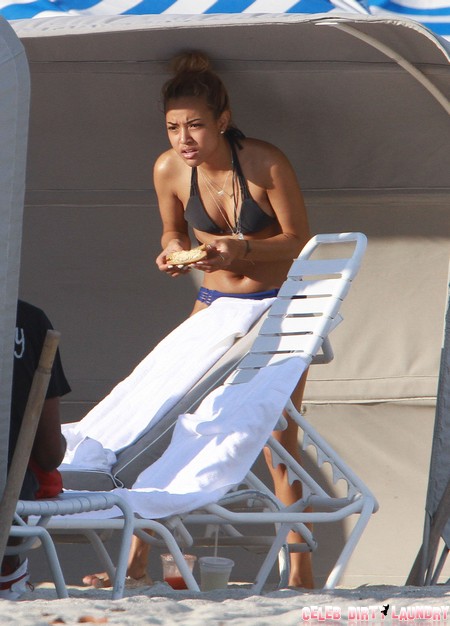 At first Chris Brown was dating Rihanna but then that ended after Chris got the bright idea of beating her, choking her and threatening to kill her, just to show how much he loved her. Recently, Chris was in a fight with Drake over Rihanna, though it seems not to be entirely his fault, but it did greatly injure Big Pat who’s known to be Chris’s bodyguard. Now why would Chris even bother to fight over Rihanna at this point, well apparently she is the “great” love of his life.

According to our source, Chris now has a girlfriend, Karrueche Tran, whose is said to be a model and of African and Vietnamese descent. I must say she’s quite the hottie hot hot hottie compared to Rihanna, so I think he was on a good track. But now, all of sudden our source reveals photos of Chris getting close to an unknown woman at a club and apparently they even were seen going home together.

They say every picture tells a story and the look on Chris’ face in the photo tells me, he’s most likely disrespecting his women again!  If Chris is really cheating on his current girlfriend, Karrueche Tran, I have one question that I’d like to ask him and that’s WHY?! Why would you cheat on such a beautiful woman like Karrueche Tran?

Being honest though, there is an awful lot that I don’t like about Chris Brown; his disrespect towards woman being on the top which makes me not respect him as a person nor do I really like his music, but I respect him for being an extremely talented dancer and that’s pretty much it. At least he has one thing going for him.