Is Harry Styles Of One Direction The New Mick Jagger (Photo)? 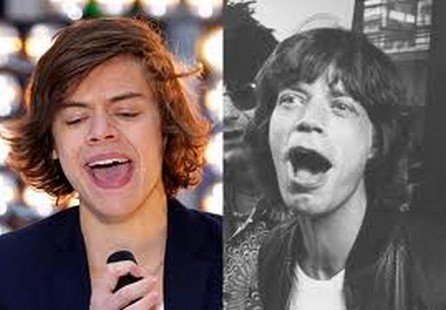 People are saying how Harry Styles from One Direction looks extremely similar to Mick Jagger in his younger years; personally I just don’t see it, maybe their hair is slightly similar but nothing much else. Their faces are nothing alike, it’s easy to tell the difference and people are now even going so far as to say they have the same style.  Sounds like more Simon Cowell bullshit doesn’t it?

No doubt that Simon picked Harry for no other reason than his resemblance to Mick.  Of course with plastic surgery perhaps Simon can help mold Harry into exactly what he needs… just give Simon a little time.

I personally see this as nothing but an insult to the legendary rocker Mick Jagger, what is it that Harry has done that could even slightly compare to him? Nothing, that’s what, the little boy in his ‘cute’ little boy band is pretty much going in one direction – and that direction is commercial crap.

Harry leads One Direction into all that they will ever be – another transitory phase in the music business – and we emphasis the word BUSINESS. I don’t see One Direction in any way becoming anything more, how could they be – they are a commercial construct – their PR people are just over-hyping them.

Mick Jagger and The Rolling Stones are almost as important as The Beatles in the history of popular music. Mick Jagger has written a countless number of songs that people love and listen to still today, he also actually sings with his real vocals using his raw talent. One Direction without a doubt uses auto tune, all “great” artists of today use it; It’s embarrassing suggesting that Harry could even be anything like Jagger, he will never be a legend or an icon to be remembered for years to come.