Is Jon Hamm Cheating On His Longtime Girlfriend Jennifer Westfeldt? 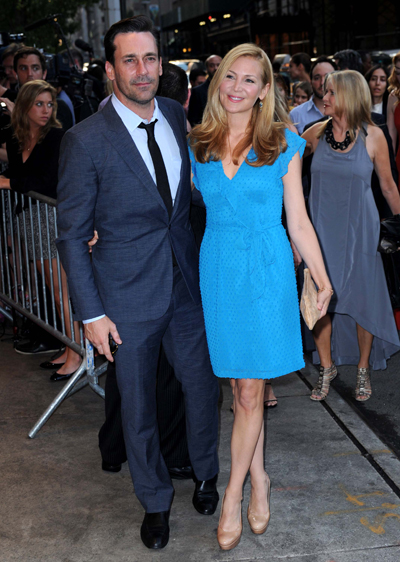 Does Mad Men star Jon Hamm have more in common with the womanizing Don Draper than we know?

Although the 41-year-old actor has been in a long, 15-year relationship with his girlfriend and Friends with Kids co-star Jennifer Westfeldt, The Daily is reporting that Jon has been “acting like a single man” and hitting on women at bars wherever he goes.

Jon and Jennifer, who have been together since 1997, were last photographed at the end of June, but since then Jon has been seen, flirting with women everywhere from Kanasa City, MO to Rome, Italy to Brooklyn, NY.

According to one eyewitness with a Twitter account, Jon and his friends Jon Glaser and Eugene Mirman were at the Hot Bird bar in Brooklyn last week and hit on every female patron they came into contact with.

So, is Jon stepping out on Jennifer, or did the stress of making an independent film together (and, not to mention, having their hotel robbed in London while they were promoting the movie this summer) lead them to quietly break up?)