Is Kate Middleton Still Anorexic And Can She Put Baby Before Body Insecurities? 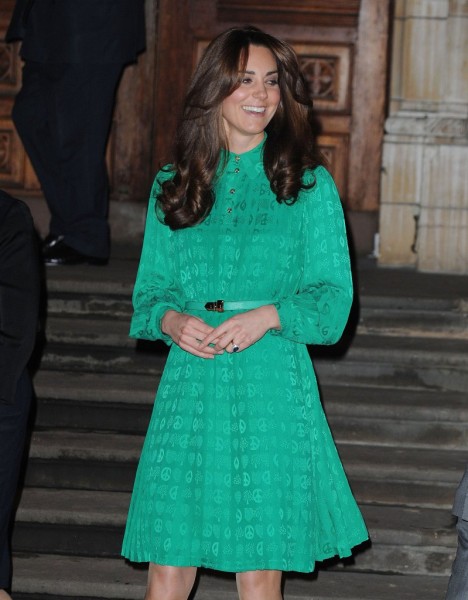 OK, so we don’t actually know if Kate Middleton’s anorexic or if she’s suffered from some kind of an eating disorder in the past. What we do know is that she’s a control freak who has prided herself on passing on the carbs and sweets ever since she knew she was a lock for Princess Diana’s ring. That’s no crime. The girl likes a tiny waist. Fine.

And everyone has pretty much passed on the weight bashing too in recent months especially when news hit that Prince William and Kate were trying for a baby and now have succeeded. So I’m surprised Time magazine lowered itself to speculate on whether Kate Middleton is too thin to bear and heir but,  in all fairness, the magazine is only calling out the 800-pound royal gorilla in the room. Here’s the thing though, the story ends up declaring Kate is not too skinny to get pregnant and had a medical professional concur. “For the most part, people who are thin do very well during pregnancy,” says Dr. George Macones, who is also chair of obstetrics and gynecology at Washington University in St Louis.

So should we get off her case? I maybe be simplifying but I always thought a woman’s body was relatively healthy if it was able to ovulate and get pregnant. Kate’s did that so she must be on the up and up. I think the real question is if she’ll gain the 25 pounds. Common theory is that 25 pounds is the average weight pregnant women should gain although women who are heavier might be advised to gain less. Everyone’s going to be watching. Do you think Kate has a responsibility as a public figure to gain the weight and show an example of a healthy pregnancy? As we’ve seen, for better or worse, her life impacts people. If Kate only puts on 15-20 pounds then women all over the world will be scrambling to do the same which is not good.

But even if she wants to put on the weight, it may be harder than she thinks. Giving up on the control and letting you body grow is contrary to everything we modern women believe. You can’t just flip a switch and change years of training. The fact that Kate’s throwing up everything she eats doesn’t help anything either. So we’ll have to wait and see. I’m really not worried. The fact that Kate’s face is puffing up shows that she’s not starving herself. And if Kate’s anything she’s an overachiever. She’s done everything the royal family has asked of her. They need a healthy baby. She’ll give them a healthy baby.

Do you know someone who had a problem with pregorexia? Kate Middleton’s skinny but has showed signs of easing up on her rigid eating habits. Will the anorexia rumors follow her forever? Do you think she’ll put the body insecurities aside and gain the recommended weight for the royal baby?