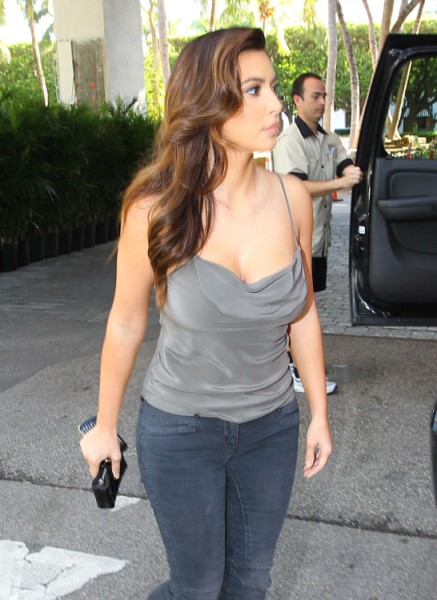 Oh those crazy Kardashian sisters are at it again. It’s no big secret that Khloe and Kim Kardashian have a not so friendly rivalry at times (Khloe likes to bitch about it constantly on the show). But could Kim be so petty as to be jealous of Khloe’s famous nipple?

Yep, you heard me. Kim’s ass might have been feeling a little put out yesterday morning. Khloe’s shockingly pointy nipple during her X Factor debut was the only Kardashian asset anyone wanted to talk about. Was that, along with the fact that Khloe has a legitimate hosting gig on an incredibly popular show, enough to send Kim into full-on panic? If so, she did what furious and disenfranchised women have been doing for years – she took off her bra!

Check out the photos below of Kim out yesterday for lunch in Miami. She’s free-balling it for sure. The ladies are holding up pretty well but is there ever a reason to go braless when you’re that well-endowed? Help me out here girls. Is she wearing a strapless bra and we just can’t see it? Does this offend anyone? I could care less about Kim’s bra usage but that fact she’s daring to go bare right just hours after her sister shocked the world with her nip slip is a tad suspect. Kim’s not stupid. She knows how to get attention and has based her whole career off of it since talent apparently skips a generation in the Kardashian family. But is this just a little too petty?

Maybe I’m looking at this from the wrong angle. Maybe Khloe’s really upset about her rogue nipple so Kim’s flashing her goodies to get people back to talking about her. My sister would totally do the same! So maybe this is magnanimous gesture, saintly even. Kim is supposed to be the sweet one.

So… is Kim Kardashian jealous of Khloe Kardashian’s nipple attention or was she just waving her jugs around because it was Thursday?