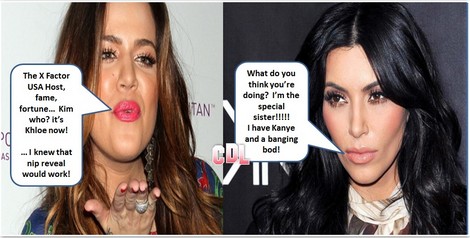 We once knew a woman who ripped off all of her clothes and drooled in the glaring sunlight. Allegedly, this woman lost her mind when she ate too much silicone. There’s another woman we know, who is not only going to rip off her own clothes, but who is also going to stab her own sister in the throat. Who is this naughty woman we hear you ask? Well, she is none other than the main bitch of the bitch tribe, the head honcho of the fame whores, the leader of the village idiots, Kim Kardashian.

Kim’s lovely primate sister, Khloe Kardashian, debuted on X-Factor USA’s first live show of the season. We doubt, in the history of the Kardashians, that anyone received such a backlash for his/her performance. Khloe’s pimple nip-nips became as popular as her horrid delivery of lines and off-tempo mumbo jumbo. Kim should be pissed, Kris Jenner should be livid, and Bruce Jenner – well, he can’t move his face from all of the Botox, so we’re unsure whether he will be anything.

Instead of bringing fame and fortune to the Kardashians, their newest cash cow was slaughtered at the abattoir of elderly Teleprompters, shot in a field of corny cheese, and held at gunpoint by Rabies inflicted fans of the popular singing show. Oh dear Godiva, how will Kim Kardashian ever recover? The spotlight is, after all, currently on the bra-less tip-tips of Khloe’s nip-nips.

No word will be uttered by the Kardashians about the new Nipplegate, but we’re almost certain they sat in front of their television screens and cackled like a demon’s first day on the job. Couldn’t any of the sisters see that their finest fame whore was being ridiculed by the blazing spotlights of that stage? Couldn’t they send a text, email, tweet, Facebook inbox and write, “Hey, soul sister, tell them to dress you properly! Biatch. Xoxo.”?

No, they couldn’t, because the jealous Kardashian bitches were relishing their sister’s demise. Kim Kardashian will be ripping off her clothes, singing her sister’s praises, and then, one fine morning, Kim will stab her sister in the proverbial back and scream, “Give me back my spotlight, you pointy nipple freak!”

Do you hear that? That’s the sound of a jealous Kim Kardashian drooling on her bedroom wall. She is, after all, the inspiration for American Horror Story: Asylum.