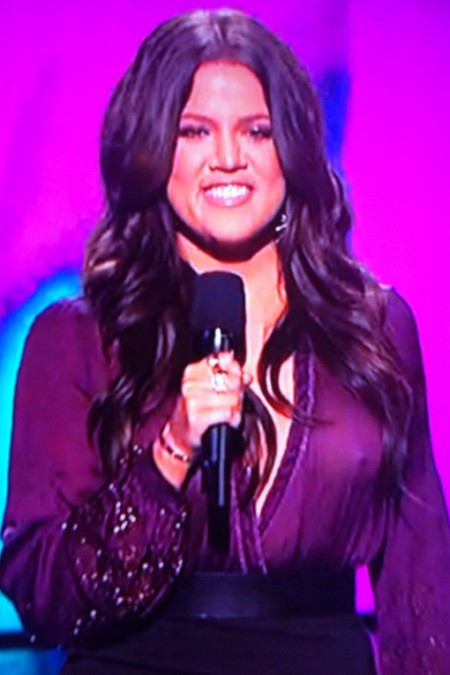 There we were, chilling with our uncle who looked like Barry Manilow with a coke habit and half-time sniffles, when Khloe Kardashian made her debut appearance on the X-Factor’s first live show. Immediately after Paige Thomas’ futuristic performance, she introduced Arin Ray by fumbling through her lines. In Khloe’s words, “Next up tonight is the first (pause) of the teens Arin Ray (without pause) this is going to be simple. All he’s gotta do is blow (pause) the mind (pause) of the judges.” Sorry, Khloe, but we never knew the judges on X-Factor have a hive mind?

The pokey breasted Kardashian was a danger to society. Not only was she unable to speak in a natural voice – she burst the eardrums of babies in Ohio – she was also walking around with little spears on her breasts. We replayed several Khloe Kardashian sections on YouTube, and time after time, her pokey breasts came precariously close to stabbing a contestant in the throat. Mario Lopez, on the other hand, was absolutely exquisite in his delivery of lines. He came across as professional, eloquent, and outstandingly gracious. The heavy handed chemistry between Lopez and Kardashian was more palpable than rotten dead people under the floor boards of a serial killer. Kardashian looked out of place, out of mind, and out of humour.  She minced around her words, screamed like a siren, popped her breasts, and stared past the camera.

We knew the hosting skills of Khloe were not up to par when her co-hosting duties were revealed, but oh dear Godiva, we never knew it was going to be this horrible. Our Barry Manilow uncle only drooled once during the show, and we’re 100% certain that it wasn’t due to that nasty cocaine habit; it was due to the Kardashian’s larger than life high definition breasts. Oh well, at least she made Barry Manilow’s day.

Do you think she was good enough? Are we already over her hosting skills? Are we too quick to judge? Let us know your thoughts in the comments below.