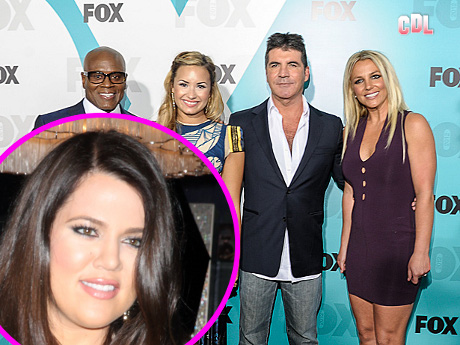 Simon Cowell has made another one of his bold moves, and this time it involves Khloe Kardashian, the fame-mongering celeb and attention grabbing reality TV star who just might be the X-Factor‘s new host — if Simon gets his way that is. Simon Cowell recently came out with his decision and, according to network sources, it’s now out of his hands and in the hands of FOX, who will be making the ultimate decision.

Gosh, can you just imagine Khloe Kardashian as a host? According to TMZ, “sources say Simon made the case that Khloe is a big draw who will complete the circle of making the show decidedly younger than last season. Khloe has a connection to Britney Spears and Demi Lovato and Simon believes the three of them create an authentic vibe that none of the other potential hosts bring to the table.”

Simon Cowell doesn’t really care who he thinks will be “best” in the role; rather, he, like any TV businessman, is scrounging around for any names that he think will draw in a crowd. And who better to draw in a crowd than Khloe Kardashian? A show featuring Khloe, Demi, and Britney — so many hot messes wrapped up into one singing competition that may or may not have good talent? How could we ever miss this?

While the network is still in its deciding rounds, a source for FOX says that it’s “highly likely” that Mr. Cowell will get his way. Doesn’t he always get his way? Now that Khloe is being considered for this gig, I can’t help but wonder if her sisters are at all jealous? Especially drama queen Kim. She’s probably furious that she wasn’t considered for the position. Anyway, what do you think about this latest X-Factor news? Would you be game-on for watching Khloe strut her stuff across that X-Factor stage? Let us know in the comments section below!

While X-Factor premieres this week, the host won’t be needed until the live shows air, which won’t begin until next month. So they’ve got some time, but not much. Better get down to business, FOX.