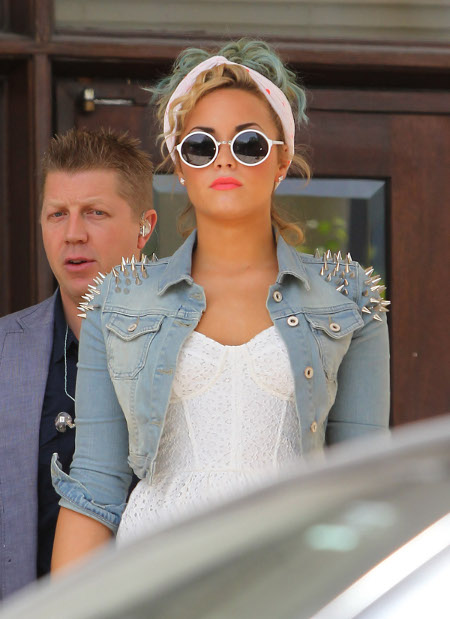 Demi Lovato and Niall Horan have been all the rage in the world of celeb teen dating/crushed/whatchamecallit, so much so that they have admitted to having crushes on one another, but still admit they’re just friends. Recent reports have suggested that Niall will have to do more than bat his blue eyes at Demi because she’s not planning to date anytime soon. The admission of celibacy (Oh Lord, is this 1902?) has resulted in Niall partying with Harry Style’s ex, Caroline Flack. No one taught Niall the bro-code it seems?

Wait, what the freak is going on here? Demi has said multiple times that she is determined to stay celibate and that she’s not planning to date. She said to iVillage, as reported by Celebs Gather, “There’s actually nothing that a guy can do to change my mind right now. It doesn’t matter how frickin’ good-looking you are, or funny, or how in love with them I am.”

We have to ask, is Demi playing hard to get? Is she planning to make Niall yearn for her like a poet yearns for inspiration? Will Niall be the only guy she will break her vow of celibacy for? Oh, the folly of youth! In a startling turn of events, Demi’s ex Wilmer Valderrama sent her a juicy tweet and according to new reports, her vow of celibacy drew his attention. Demi has also revealed what her “type” is and we doubt Niall fits into that shoebox category. She likes older guys and has said that she had a crush on Leonardo DiCaprio since she was five-years-old. Niall does not fit this category, because he resembles Esmerelda — the timid looking girl who proclaims that aliens abducted her one night and ate her brain. Unfortunately, Niall does not have the rugged, older gentleman appeal that Demi loves so much.

We reported a few months ago here on Celeb Dirty Laundry that Niall and Demi’s showmance has been orchestrated by the devil himself, Simon Cowell. Could it be that X-Factor’s second season is picking up in popularity and Simon decided to “end” the showmance? Could it have all been a lie, like elderly people telling us it’s their “real” teeth? We don’t know. We doubt Demi and Niall even care – they have careers and brands to focus on.

A vow of celibacy is not bad, especially for impressionable young girls who are obsessed with One Direction and guys in general. Demi spoke out about her vow of celibacy and said, “Right now, there’s nobody more important to me than myself and my recovery. I think that’s a thing that a lot of young girls need to remember. There’s no one more important than themselves, especially when it comes to girls that are in their late teens or early teens and are trying to figure out who they are. It’s really easy to be influenced by a guy that you like, and this is a period of time when you need to figure out yourself. That’s what I’m doing right now.”

We have to say, we applaud you for your message Demi, even though it fits neatly into your brand of the troubled teenager who made her life okay again by being a multi-million dollar recording artist. We’re not too sure what to make of this saga, but one thing is for certain, whether this is a showmance or not, Niall needs to move on, because Demi isn’t going to budge.

Let us know in the comments below if you think this has all been a lie and if Demi is actually as “real” as a counterfeit bill. How would you feel about Demi Lovato and Niall Horan dating for real?