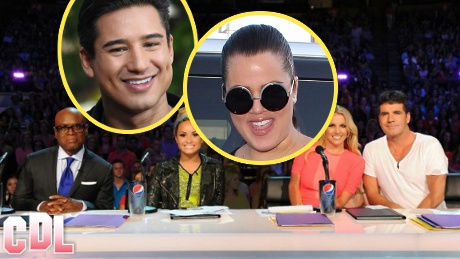 X-Factor season 2 is well underway, but one question that has been lingering in the air for a while now is who’s going to host the show once the actual competition begins. Well, it looks like studios are in the final negotiation stages to deem Khloe Kardashian and Mario Lopez as co-host extraordinaires for this second season. We pretty much banked on the fact that the show was gunning for Khloe, as she was Simon Cowell‘s first pick several weeks ago, and he wasn’t shy about expressing his desire to have the Kardashian on his show.

According to sources close to the judge, Simon chose Khloe because “Khloe is a big draw who will complete the circle of making the show decidedly younger than last season. Khloe has a connection to Britney Spears and Demi Lovato and Simon believes the three of them create an authentic vibe that none of the other potential hosts bring to the table.”

The final, finishing touches are being placed on their deals and, while TMZ states no official statement has yet been released, it’s assumed that the studio will release the news sometime this week. It’s getting down to the wire, as the audition rounds of X-Factor are nearing a close. The co-hosts will take the stage in the early parts of November.

X-Factor has spent an atrocious amount of money on talent this year, but Britney Spears is still in the lead with a whopping $15 million paycheck. We hope they’re satisfied with their ratings after spending all this moolah. So why the Mario Lopez decision? Is it really necessary to have two hosts? Perhaps Mario was a safety pick — a veteran host to stand beside Khloe Kardashian in case she totally biffs it. What do you think? Khloe Kardashian, Mario Lopez X-Factor co-hosts: YES! or ACK, NO THX!