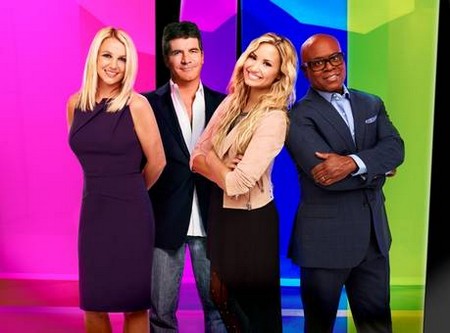 The X-Factor USA is back after a bit of a rain check. The first live show was aired last night to an unsuspecting audience. Regrettably, we have to admit that almost none of the contestants were able to pull it off. The 16 contestants went head-to-head last night for a spot in the finals, but most of them completely lost it halfway through their performances. Tonight, 50% of the contestants will be safe, while the other 50% will be up for elimination by the judges. There will also be no official voting by the audiences at home, so put down that phone Mildred!

Paige Thomas – What Is Love? – Mentored by Demi Lovato – Paige’s futuristic Ice-Queen performance was on-par. Her vocals were strong, the performance was exciting, and the nerves were in check, somewhat. The disco chorus of the song lacked a certain zest, but Paige managed to pick it up near the end. It was a tad bit too post-90’s for our liking, but it was a proper performance nonetheless. Our score – 6 out of 10.

Arin Ray – Keep Me Hangin On – Mentored by Britney Spears – Arin is a cool kid. He kept his pop star performance in his back pocket for the live shows. This modernized version of a Supremes classic gave Arin a contemporary appeal.  He was reminiscent of a young Chris Brown, and even though the vocals lacked substance, he was still able to deliver an exquisite pop star performance. We agree with the judges that the dancers somewhat distracted him, but he was still able to pull off an above-average performance. Our score – 7 out of 10.

David Correy – Your Love Is My Love – Mentored by L.A. Reid – One of our front-runners from the early rounds of competition took on a Whitney Houston classic. Now, taking on Whitney means you have guts, and we like guts in X-Factor contestants. David’s rendition was absolutely spectacular. His upper register crying voice brought across emotion, melancholy, and nostalgia. The unaffected runs were exquisitely maneuvered to fit into the difficult tempo of this classic Houston hit. Correy’s love fest had us screaming, “AMEN BROTHER!” Our score – 9.5 out of 10.

Sister C – Hell on Heels – Mentored by Simon Cowell – This below-the-radar sister group delivered on their country performance, but we’re still not really feeling them. They were disconnected from the lyrics and the vocals, their performance was robotic and manufactured, and they felt small and outnumbered on the massive X-Factor stage. Sorry girls, but we didn’t like it. Our score – 5 out of 10.

Jennel Garcia – Home Sweet Home – Mentored by Demi Lovato – Our early favourite’s nerves were getting the better of her during the opening of this difficult Motley Crue classic. This Demi Lovato lookalike (doesn’t she remind you of Diana DeGarmo from American Idol?) picked it up near the middle of the song and blasted away the critique. We had several issues with Jennel’s performance, including the slightly robotic chorus vocals, the Lovato cloning, and the loss of first audition elegance. A wind machine and over-the-top pyrotechnics do not mask off-pitch vocals. Could it have been the song? We hope so. Our score – 6 out of 10.

Diamond White – Hey Soul Sister – Mentored by Britney Spears – Okay, we’ll admit, Diamond White has been our favourite contestant of the bunch, and not due to her vocal ability, but due to her sheer cuteness and old soul channeling. Unfortunately, Diamond’s 90’s throwback performance lacked the popular Diamond White appeal. It was emotionless, manufactured, and slightly cheesy. The usual brilliance of Diamond was clouded by smiling-until-I-die dancers and a sparkly neon background. See, this is what irks us about X-Factor – the singers start off as amazing vocalists, but they’re so body snatched by the juggernaut machine of the show that they lose the appeal that made them cool in the beginning. Sorry, Diamond… Our score – 6 out of 10.

Lyric 145 – Boom Shake The Room/Gangnam Style – Mentored by Simon Cowell – This below-the-radar group was technically brilliant. The mash-up didn’t work; Gangnam Style’s quirky and cheesy vocals came across as tacky and heavy-handed. One positive point to the whole performance was the absolute larger-than-life explosion of vocals and lights. It wasn’t all bad, and the performance was actually quite pleasant to watch! Our score – 7 out of10.

CeCe Frey – Because The Night – Mentored by Demi Lovato – The generally irking CeCe dyed her hair, lost her irritating personality, and gyrated on stage. The vocals were extremely weak – perhaps some of the weakest vocals so far. The performance (Ke$ha mixed with Gaga) was pleasant and larger-than-life, but CeCe failed so miserably in the vocal department that the performance came across as flat and mindless. Overall, a disappointing and stoic turn of events. Our score – 6 out of 10.

Tate Stevens – Tough – Mentored by L.A. Reid – This country crooner hit off-pitch notes during the opening of his song, but he quickly picked it up and impressed us with his radio-tone and soft vocals. Tate still lacks the necessary emotion to make the performance believable, but if he is able to pick up on the emotive moments in a song, he might be able to make good on his country promises. Our score – 6 out of 10.

Beatrice Miller – I Won’t Give Up – Mentored by Britney Spears – This extremely emotional Jason Mraz song (one of the best songs of the year) was not well executed by Beatrice. The opening, lower register vocals were slightly off-key, and the chorus vocals were reminiscent of a broken microphone adjusting itself to fit the pitch. The styling was ABSOLUTELY horrible. Beatrice deserved better than this self-indulgent horror. Our score – 5 out of 10.

Jason Brock – Dance Again – Mentored by L.A. Reid – Earlier during the competition, we said that Jason Brock’s theatricality might cost him in the long run. Jason came across as a below-average Adam Lambert clone, with Las Vegas featherhead girls who danced like there was no tomorrow. It was an absolute disgrace to hear Jason’s voice become encumbered by a techno pop backtrack, sparkly dancers, and self-indulgence. The disco vocals turned into a screaming match and he missed the pitch on every second note. Our score – 5 out of 10.

1423 (formerly known as Lylas) – We Are Never Ever Getting Back Together – Mentored by Simon Cowell – This X-Factor super group blew us away during the judges’ homes phase of the competition. They once again delivered during the live rounds of the competition. The harmonies were slightly off, but the girls were able to pull off an exquisite performance. This song would sell like hot cakes if it were to be released as an official single. We were truly impressed by the quirkiness, cutesy appeal, and the strong vocals. Our score – 8 out of 10.

Willie Jones – Here For The Party – Mentored by Demi Lovato – Willie needs to stick with what he knows best, namely pulled back country vocals. His performance was, as Simon Cowell said, silly. There was an air of self-indulgence to the performance that came across as Las Vegas gone wrong. Nothing felt natural in the horrid performance. Our score – 5 out of 10.

Carly Rose Sonenclar – Good Feeling – Mentored by Britney Spears – Carly’s vocals felt slightly unnatural, but her performance made up for the staunch discomfort of the vocals. She delivered, mostly. There were plenty of issues with her pitch during the up-tempo middle-parts of the song. She also lacked that beautiful zest that made her so popular in the beginning. It was above-average and better than most of the vocals of the night, but she can do so, so much better. Our score – 7 out of 10.

Emblem 3 – One Day – Mentored by Simon Cowell – This pop sensation power “boy band” has been overhyped by almost everyone on the blogosphere, the internet, and print media. Their performance was excellent, but their vocals lacked the quality that made them awesome in the beginning of the season. The overall performance came across as a celebration of muscles and masculinity. The backdrop was infused with images of the trio on a stage, ever present with their vests and abdomens. There’s no denying that Emblem 3 is USA’s answer to One Direction. Our score – 7 out of 10.

Who was your favourite of the night? Do you think we got it wrong with certain contestants? Let us know your thoughts in the comments below. Remember, stick to Celeb Dirty Laundry for full X-Factor recaps, reviews, news, and spoilers.