Is Kristen Stewart Actually The Victim in Affair With Rupert Sanders? 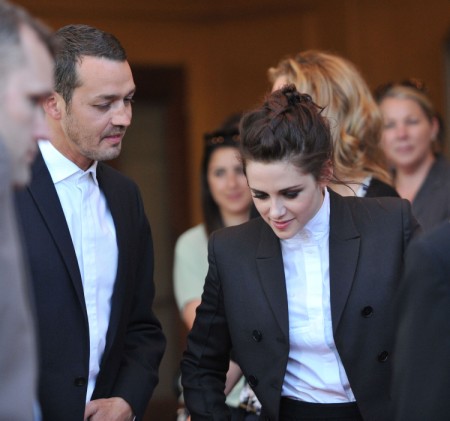 New light has been placed on Kristen Stewart and Rupert Sanders’ affair and it isn’t as glaringly harsh against the Twilight actress. Kristen’s been labeled the most hated woman in Hollywood and (my personal favorite) a trampire but reports suggest that Rupert had his eyes on Kristen long before she let hers stray away from Robert Pattinson.

A source told People magazine, via Hollywood Life. “Rupert had been infatuated with [Kristen] since the production [of SWATH], but she always kept it professional because she loved [Robert Pattinson]. She still does. It only became a flirtation recently, and she was lured into a brief situation that she never wanted.”

See?? She was “lured”. He was “infatuated”. Finally, two claps for Kristen’s people who managed to spin something the right way for a change. She never should have went on the defensive. Rupert let her take the fall and much of the blame. But let’s be honest. He’s 20 years older than her. I don’t care how bad ass Kristen thinks she is, she’s still practically a naive child and ripe for some old dude to take advantage of her. Am I saying that’s how it went down? Maybe. I have no idea. What I’m saying is that Kristen’s people should have ran this story much earlier in the game like the day BEFORE the pics hit the internet because Rupert looks creepy as all hell in those photos. Take a look back at the one where he’s behind her on the ledge. Nasty gross! And I can photo assume all day long. He looks way more into her than she looks into him. She looks uncomfortable more than anything. See how easy it could have been for Kristen’s team? I just convinced myself!

It’s so much easier to forgive a person who was led astray by a charismatic, charming older man (see also: Patty Hearst, Katie Holmes, anyone who dates Hugh Hefner) than it is to forgive someone who threw away the hottest young actor in Hollywood because she was bored. That’s crisis management 101.

Do you believe Rupert took advantage of Kristen or is this too little, too late from her inept PR team?