Is Kristen Stewart Lying About Having Sex With Rupert Sanders? (Photos) 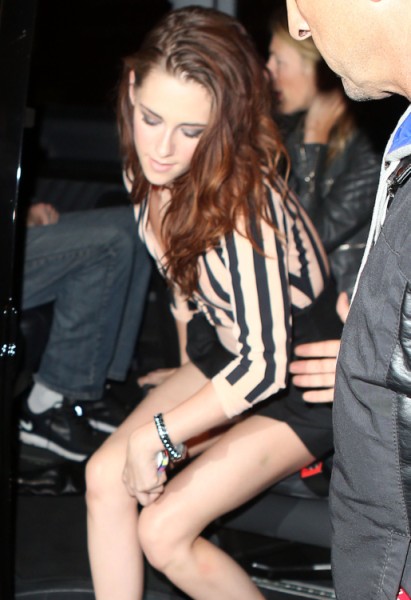 Kristen Stewart has been living it up in the City of Love the last couple of days basking in the glow of having her man and her career back. But did Kristen tell Robert Pattinson a few little white lies to keep their reconciliation going strong?

It depends on who you talk to. Radar Online reports that Kristen and Rupert Sanders have been adamant that they never slept with each other and only engaged in a few heavy petting sessions. Does anyone other than Rob believe them?

“Kristen and Rupert both told their respective partners that they didn’t actually have sex,” a source said. “Kristen was absolutely steadfast that she only engaged in several make-out sessions with Rupert but never slept with him. Rob didn’t believe her in the beginning but as time wore on he accepted her explanation. Kristen has given Rob passwords to her voicemail and e-mail account to prove she has nothing to hide and will do anything to get his trust back. There are still a lot of raw emotions there and time will tell if Rob and Kristen stay together. Rob and Kristen will be promoting the final Twilight movie and it will be very interesting to see what happens after that.”

Can we point out the first lie? The source says “several make-out sessions” so whatever happened to that “this momentary indiscretion” she sobbed about in her apology letter? If she lied once, doesn’t Rob know she could lie again? But he loves her and ultimately wants her back so he’s going to believe her until she f-cks up again. Fine. I get it.

Although last night in Paris she was obviously sending a message that she was on the straight and narrow. She dined at  La Fidélité  restaurant which translates to fidelity in English. While the cat’s away the mouse is definitely not playing, right Kristen? Was the restaurant name a coincidence? I’m thinking no. Do you know how many amazing restaurants there are in Paris? Why that one? I’m sure the food was great but that smirk Kristen was wearing earlier in the day was telling. She’s got her sense of humor back. I appreciate anyone who can poke fun at themselves. Still, do you think her relationship with Rob is a little too raw for such theatrics? Do you think reminding Rob and the world of her dry hump session is the way to move on? Is Kristen Stewart lying to Rob?