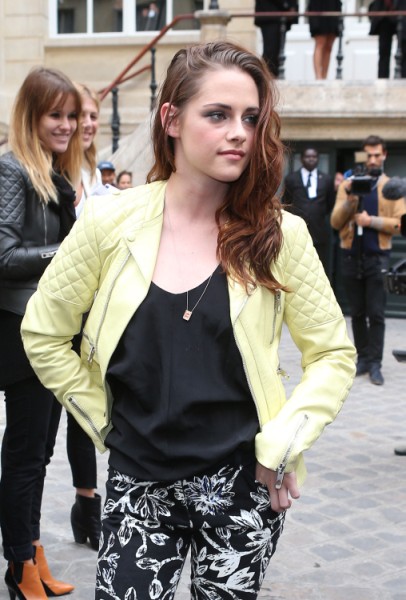 As promised Kristen Stewart showed up for the Balenciaga fashion show on Rue Cassette this morning. The actress looked fresh and calm and even posed and (gasp!) smiled for those pesky photogs! One photographer told People magazine, “It was a whole new Kristen.”

Kristen wore a bright yellow jacket, black top and patterned black pants. I hate just about everything going on with this ensemble but I’m not a fashionista so maybe it’s amazing. I just hate patterned pants, not my thing.

But I am getting a confidence from her we haven’t seen much lately. Everyone and their mom is saying it’s because Kristen and Robert Pattinson are reportedly shacking up again and desperately back in love. I’m down with that explanation. She does seem a lot lighter, like the weight of the world isn’t resting on her narrow shoulders anymore. It’s too bad she’s all covered up though. The tabs are insisting Kristen got a tattoo to show Rob how much he means to her. Robsten forever! I hope the tat doesn’t say “Winona Forever” because that would just be embarrassing.

So what do you think of Kristen Stewart at Balenciaga? Do you like the message she’s trying to convey? It looks like she wants to throw up her middle finger just for old time’s sake but she’s restraining herself. I freakin’ love her hair though. I would do anything to get mine to fall like that! Does it look like she’s finally put the scandal behind her? As we reported yesterday, her relationship with Rob is still on shaky ground but you couldn’t tell from these photos. It looks like Kristen has everyone eating out of the palm of her hand again – especially Rob. Just last month she was lovingly being referred to as a Trampire and now she’s fashion’s It girl again. How did she do that?