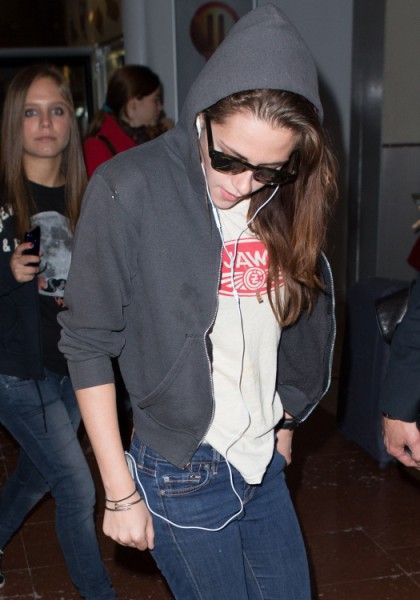 Hasn’t Star magazine heard? Robert Pattinson and Kristen Stewart are shacking up again! They are totally back together. Not so fast it says! A source told the tabloid that Kristen’s been bad mouthing Rob’s moves in the bedroom so he’s naturally p-ssed and not about taking her back. This poor guy’s ego can’t catch a break!

“Rob couldn’t believe that Kristen was telling everyone that he’s bad in bed,” the source said. “Not only did she cheat on him, she humiliated him. Now that he’s heard about the rumors she’s been spreading, there’s no chance [he’ll take her back].”

So is this the real reason he’s not being considered for Fifty Shades of Grey? Better question – is this the reason Kristen cheated with Rupert Sanders? Well, I have my doubts – not that Robert Pattinson’s bad in bed – but about the two still being broken up. Lainey Gossip wrote today that her sources told her the couple is “fragile” because Rob’s still trying to get past his trust issues but they are “more intense than they’ve ever been, especially Kristen. It’s like they’re desperate for each other all the time. She’s trying to see this as something that brought them closer together”.

That is such a dumb ass cheater thing to think but if it works for them then great. But they’ve only been together like three years. Is Rob going to give her the free pass every few years to keep things fresh? I know different strokes for different folks but that’s a slippery slope.

But back to the boudoir. So if Lainey is right and Kristen is so desperate for Rob then I doubt she’d crush his spirit and demean his manhood all over Hollywood. Just saying…. Again, poor Rob. He’s got to find a way to ditch this cuckold image. He’s coming off as the b-tch in that relationship. Did you check out the photos of Kristen landing in Paris for Fashion Week. The sulky, sad sack Kristen was a thing of the past. She was sporting a new smirk as if to say “Haha, b-tches! I told you I’d get him back. Suck it!” Are we OK with this new media spin – Kristen as victor and Rob as besotted pushover?