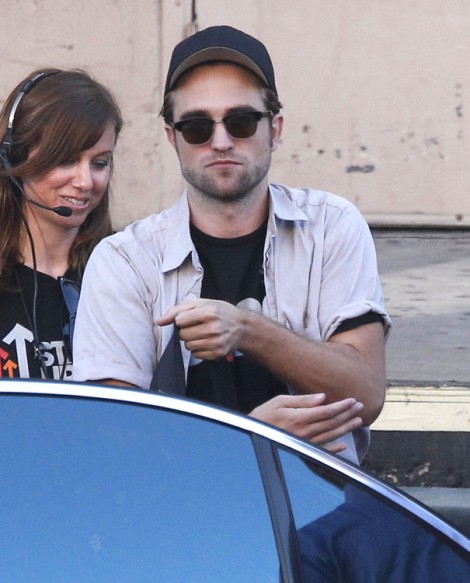 The character of Christian Grey was based on Twilight’s Edward Cullen so Robert Pattinson is reportedly sour about the fact that he’s currently out of the running for the sex-crazed lead in Fifty Shades of Grey.

FSG author, E.L. James, has other hotties on the brain and Pattinson is just not one of them and now his feelings are hurt and he’s seeking vengeance for the slight! According to Entertainmentwise, Rob told  Talia Soghomonian: “I think the author has written me out of it. I saw some interview earlier and they went, ‘Oh, it could never be him’. I’m like, ‘Hey, I’m going to make you pay for that!'”

No. No. No. This did not happen. Rob did not say those things. I’m pulling a Gossip Cop and calling straight up bullsh-t on this. There are made up stories I can take and some I can’t and I just can’t stomach this nonsense this early on a Sunday morning. If Rob did actually say this then he was joking because why would Rob give a damn if he wasn’t being considered for this role? He shouldn’t take it even if they did offer it to him with a yacht full of cash. This movie will be a train wreck. Trust. There’s no way any A-list, respectable actor will sign on if the script is anything like the book. I’m not saying Rob is a respectable actor but he is considered A-list and has more money than he knows what to do with. There’s no reason to shoot himself in the foot with this craptastic film.

And neither will Michael Fassbender for that matter. I’m totally in love with him because just last week he put the kibosh on the idea that he would even consider doing the movie. He basically told someone he’s never read it and doesn’t plan on it. Yes Michael! And there’s no way Ryan Gosling will sign on either. I’m telling you. The only actors who are going to sign up for this are B-level trying to make something happen. Whatever I say about the movie, it will have major exposure and a lot of actors will sacrifice art for celebrity. I’m sensing this could be a rewind of Elizabeth Berkley and Showgirls only Showgirls was at least entertaining in a horrible way. FSG will just be horrible.

But who knows. I could be wrong. Maybe a brilliant screenwriter will come in and make some magic. It’s Hollywood after all. But back to Rob. I figure he’s got enough on his plate right now. He just got Kristen Stewart back and has to gear up for the last Twilight publicity blitz. The last thing he probably cares about is starring in another embarrassing franchise. Share the wealth Rob!

Did you want to see Robert Pattinson in Fifty Shades of Grey?