Kristen Stewart And Robert Pattinson Together But He’s Afraid Of What His Fans Will Think! 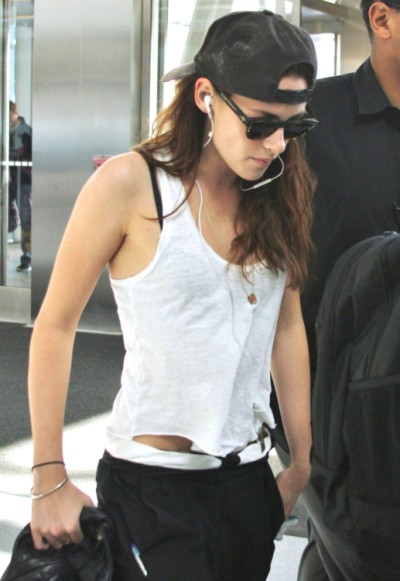 Now Kristen Stewart’s comments at TIFF and the fact that she refuses to get papped without wearing something out of Robert Pattinson’s closet are starting to make sense. According to Lainey Gossip, it was “communicated to people” at TIFF that the Twilight co-stars are very much back together.

Kristen (sort of) said as much when she told a reporter that she and Rob were “fine“ but it’s not like that’s the most definitive answer. Fine can mean a lot of things. Fine can mean they can stand to be in the same room together but if Robert catches a whiff of Kristen, he wants to rip out her neck. Oh, wait, sorry, that’s Twilight. Anyway, apparently the pair are staying coy because Rob’s people are nervous about what his fans might do when they find out they’re back on. I doubt the backlash could be on the same scale as the “I hate Kristen Stewart” kind we felt last month but they must be worried it could be close. Crazy, right? The two have only recently been comfortable displaying their love to the public and now it’s going back in its shell.

Well, if you weren’t excited about the final Twilight premier, you’ve got to be interested now. Rob and Kristen will walk the red carpet together with Taylor Lautner squeezed in somehow and it will be just as awkward as it used to be!

Whatever. Good for them. I always knew he’d take her back! But you have to wonder when, right? With all the crazy tabloid news that erupted post cheating scandal, what reconciled the two? Or did they ever really break up? Was it just a break? They did move out of the house they shared together and Kristen did just buy a new pad. Maybe the cheating and the break convinced them to relax and slow down. Kristen is only 22. The babies and the playing house can wait!

What do you make of the news? Are you surprised Rob gave Kristen another chance? How long do you think they’ve been back together?