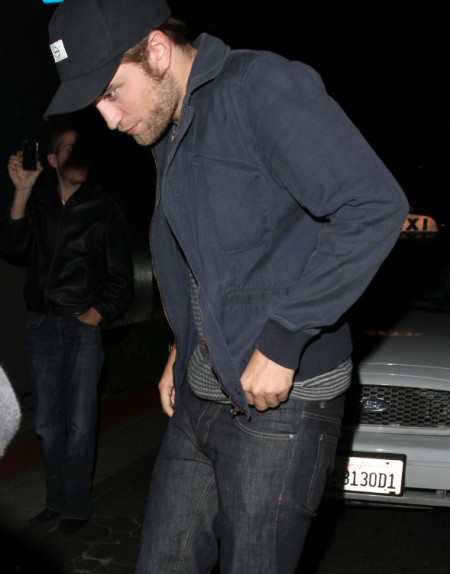 People magazine, which has been all over this story since Us Weekly beat it to the pics, reports the 26-year-old actor packed his bags and left the Los Angeles home he shares with Kristen. A source told the magazine Rob has been in seclusion and not in contact with Kristen. “I’m not sure they’ll be able to recover from this,” the source said, adding Robert’s “heartbroken and angry.”

Few would deny he should be ESPECIALLY since we all just found out the LA Dodgers hat Kristen was sporting while trying to go incognito during her “momentary indiscretion” with her Snow White and the Huntsman director, Rupert Sanders, was actually Rob’s. There’s photos all over the place of him wearing it. OK, now that’s so gross on her part. Wearing your boyfriend’s clothes while you cheat on him is so not cool.

Do you think Rob’s packing his bags for good? He might love Kristen but his thoughts on cheating are pretty pronounced. In a sadly, ironic interview with Italian Vanity Fair, Rob said, “Life is not black and white. There are married couples that never see each other. Is that marriage? But there’s a thing I’ve never got: That is, why do people cheat? I can understand the impulse. But not how you can keep two relationships going at the same time for long.”

What do you want to see Rob do – love or leave Kristen? I’m sure both is an option. My heart bleeds for the guy. He didn’t ask for this but Kristen’s selfishness sure gave it to him. This dude hates public attention so much, so although the cheating was bad, being followed and hounded over the scandal was pretty much the worse thing Kristen could lay at his feet. I’m pretty excited the bags are packed. It shows that while Kristen might have ripped off his member, his balls are still in tact.