Kristen Stewart Out Of Hiding For Paris Fashion Week (Photos) 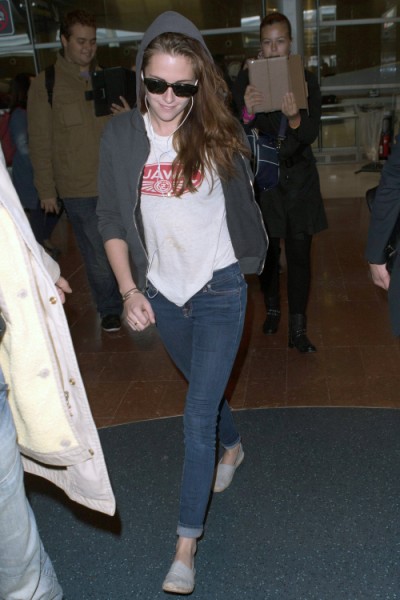 And I thought we’d have to wait until Breaking Dawn 2 to see Kristen Stewart front and center again but the fashion gods wait for no woman! Kristen just touched down in Paris amid reports she’ll be sitting front row at tomorrow’s Balenciaga show for Fashion Week. Stewart is the face of Balenciaga Paris’ new women’s scent, Florabotanica.

I can’t wait to see what she’ll wear. I love Balenciaga and think Kristen has the perfect look for it so hopefully she shuts it down. The look is all hard and leathery and bad ass which is exactly what her image needs. No more sulking! No more hiding! But all of this is still kind of funny to me especially because of what she just said about being apart of a marketing campaign. She told Glamour Germany: “Unfortunately, there are a lot of those people out there, they are fucking everywhere, and they try to suck the soul out of you. For example, I would never do a makeup campaign, even though the [final] photos with me would probably look good. Thank you, but it doesn’t interest me.”

But perfume is obviously perfectly acceptable for the soul!

Anyway, with Kristen Stewart in Paris, where could Robert Pattinson be? Is he still holed up in their love nest, hiding from his fans, anxiously waiting for her return? He’s been MIA since his Cosmopolis appearances. It’s as if he and Kristen took turns. First she hid while he charmed the reporters and now vice versa. Apparently they are still trying to make it work but photo agency FameFlynet said the couple was on a “one month trial”. I read this ridiculous story that said Rob had a list of rules that he’s making Kristen live by which includes never seeing Rupert Sanders again and not going anywhere without having someone with her. I wonder how soon in advance she had to tell him about Fashion Week! Do you think Balenciaga had any sympathy for her situation? Hells no they didn’t! Boyfriend problems? Get your ass on the plane and sit front row! That’s all we pay you to do! The fashion house has got to love it though. This is probably the most anticipated show in  Balenciaga’s history.

Are you excited to see Kristen Stewart at Fashion Week? What do you think she’ll wear? Check out the photos of her leaving  Charles de Gaulle airport below. The photo agency had to point out she had a stain on her shirt. Such assh-les!