Is Kristen Stewart Using The Media To Get Back With Robert Pattinson? 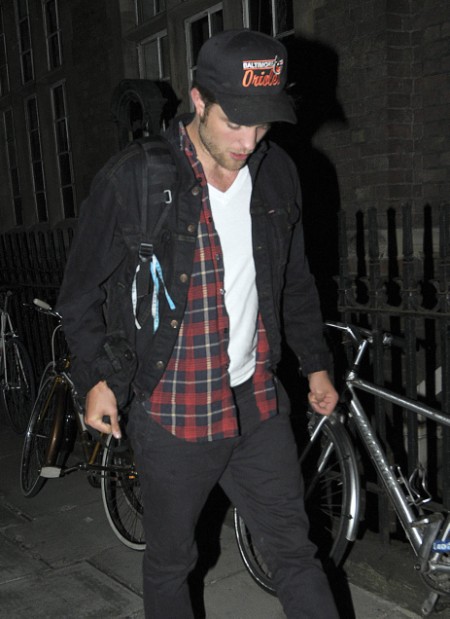 It came to our attention that Kristen Stewart’s wearing more than just Robert Pattinson’s hat and ring. It turns out that while being photographed for the first time since her cheating scandal broke, the image-challenged actress was also using Rob’s backpack with its signature blue ribbon on the handle. I’ve posted the pic of Rob carrying the backpack above and you can check out Kristen doing the same thing while out in LA earlier this week. Coincidence? I think not!

I mentioned this yesterday but it bears repeating. Why would Kristen cloak herself head to toe in Rob’s gear for her coming out party? I can only think of a few answers. The first is that they have been together so long that practically all of his stuff is hers and vice versa. That’s the boring answer. The second is that she misses his smell and yearns for him so much she’s wearing all of his things so she can feel closer. That’s a little better. The third is that Kristen knows Rob won’t speak to her so she’s sending him messages through the press of her undying devotion and unwillingness to give up on the relationship. Yes, that’s the best answer! Because why else would she do it? She must know by now that her Twilight faithful will pick up the fact she’s wearing his things and will post it all over the internet. Is this her only hope in getting him to understand what she’s going through?

Because last I heard, Rob doesn’t want anything to do with her. Hollywood Life reports:

“Kristen Stewart is definitely still in love with Rob and is going through the motions of a breakup. She really wants him back but Rob is not interested in talking to her right now and that is certainly making things difficult for the plans on doing any press together for when Twilight comes out,” our source says. Our source tells us that keeping Kristen, 22, and Rob, 26, separate during the press tour is a high priority. “Chances of them being in the same room is highly unlikely. They are going to have the timing of interviews timed out to prevent awkward encounters,” they say.

If she can’t even get him in the same room, how is she ever going to get him to forgive her?

Time. Rob needs time. But I think Kristen’s over the waiting game. It’s been over a month. You can only hate yourself for so long. Kristen’s finally come out of hiding for On the Road, and although she’s canceled her upcoming Twilight conventions, that doesn’t mean she’s giving up on Robert. She’s feeling her way through her image comeback right now. Slowly but surely, she’ll make a full on reemergence with TIFF and know exactly where she stands.

Do you believe Kristen’s sending messages to Rob? Is she using the paparazzi to get into contact with him or is it just a case of wanting to wear his things so she can feel closer to him?