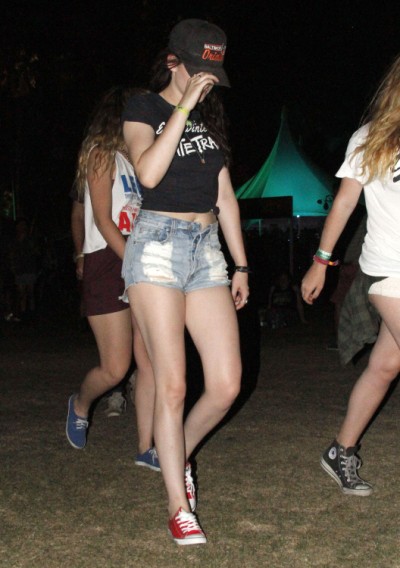 Kristen Stewart surfaced yesterday for the first time since her cheating scandal with Rupert Sanders and it seems the actress still hasn’t given up on her rocky relationship with Robert Pattinson. According to PopSugar, Kristen was seen wearing Rob’s Orioles baseball hat and seemed to be channeling Miley Cyrus with a cropped white T-shirt. Please don’t tell us you’ve found the light with pilates too Kristen?

Hollywood Life is naturally taking the pics one step further by alleging Kristen is also sporting the gold ring Rob bought her. It then had a relationship expert explain why she would be doing that but I refuse to reprint that nonsense. You don’t have to be an expert to know why Kristen is still wearing Rob’s ring. She wants him back. She misses him. She still loves. She’s completely ripped to shreds by the worldwide embarrassment she’s caused him, blah, blah, blah. No sh-t.

Anyone else excited to see that she’s living and didn’t actually turn into a Red Bull and cigarettes vampire? I am. It’s like I’ve been telling her, she needs to get out and about and move on. Was it the best idea to wear his hat though? The last time we saw Kristen wearing Rob’s hat she was getting smushed in her Mini Cooper by a nasty 40-year-old. I’m just saying… not the best way to make me forget.

But let’s be nasty b-tches and photo judge. The tabs have been on Kristen about her unhealthy lifestyle since she and Rob split. Does she look at death’s door? I’m not seeing it. She’s always been pretty skinny. She looks p-ssed and over it though, doesn’t she? I would be too if I were her. Takes gut to wear a belly shirt when the whole world is calling you a Trampire. Good for her. Did Miley call her up and say, “Hey gal! Whenever I want to get some attention I just flash my good ‘ole belly button to y’all. Works like a charm!” Does Kristen strike you as wanting attention right now? She could have worn a snow suit and the paparazzi would have swarmed. So why would she wear Rob’s things if she knew the whole world would be watching her every move? Is it a message to Rob? If communication is as stayed as the tabloids are insisting, is this one of her only plays to show him how much she still cares? I wouldn’t put it past her. She’s desperate at the moment. I think she’d do anything to get that boy back. Maybe she’s also taking a page out of Liberty Ross’ playbook. Liberty’s been all about the double entendres with her free condor pics and crucifix necklaces. Maybe Kristen really is fed up with all this sh-t and wants to resume her life. I’m so ready for that. I would love a non-apologetic Kristen to emerge, surly and crochity as ever. Yes, she did something stupid and wrong but now it’s time for some rights. Go on Kristen with your bad self. Flash those abs!

Do you think Kristen’s surfacing was a message to Robert? Is it a little desperate or do you think she still believes a reconciliation is in the cards?