Kristen Stewart Finally Faces the Truth: No Hope for Her and Robert Pattinson, Relationship is Over 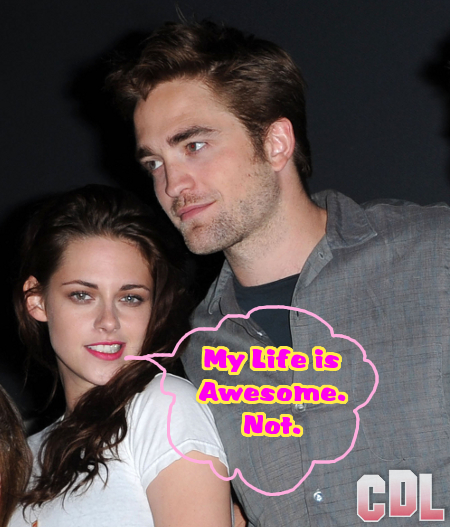 Kristen Stewart has finally chosen to face reality and admit to the world that there’s no hope for her and Robert Pattinson. She’s starting to accept the fact that her relationship with her Twilight and Breaking Dawn costar is over. For good. While Kristen was glad Robert chose to stay mum on the topic of her cheating scandal, ultimate betrayal, and didn’t hang their dirty laundry for the world to witness on national television, watching him do the interview really put things in perspective for her.

“Just like his devout fans, Kristen tuned into Robert’s interview with Jon Stewart with drawn breath,” an inside source told Radar Online. “But after seeing him deflect the questions about her, Kristen’s anxiety soon disappeared and instead she was filled with regret. While she was obviously relieved that Robert didn’t trash her, the realization that their relationship was finally over hit her hard.”

The source says further: “Kristen was praying that after the dust settled she would get another chance and she was clinging on to that hope. But she knows now that it’s not to be. Instead, she believes that they can now work on a friendship and is desperate to apologize to Robert in person for her affair with Rupert.”

I don’t really expect Robert to take Kristen back, and now it seems that Kristen has finally opened her eyes to that truth as well. However, stranger things have happened in Hollywood and who knows what will become of Robert Pattinson and Kristen Stewart in the future. We’re all aware that Robert Pattinson was hella angry when he first learned of his girlfriend’s scandalous affair with Rupert Sanders, but is he really planning on drawing out that anger?

Allegedly, he’s “Angry at Kristen for ruining what they had, angry at her for the public embarrassment. But he’s starting to wind down and really think about what he’s going to do regarding his relationship with Kristen. He goes back and forth.”

What do you think? Will he shake Kristen’s hand and work toward building a new friendship? They may do just that, but something tells me that this little scandal isn’t one that he’ll pretend never happened. If they want a friendship, there’s definitely going to be some heavy lifting involved. Good thing they’re super-strong vampires, right?