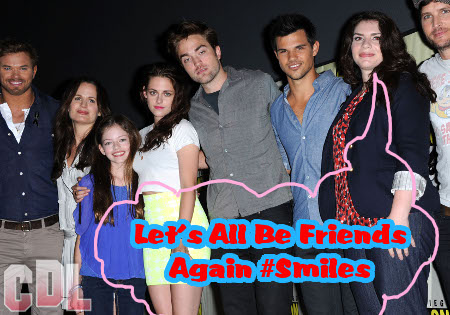 Kristen Stewart is a big mess right now, and we all know why. It’s about time for Robert Pattinson to make his television rounds and Kristen Stewart is terrified of what kind of fury her Breaking Dawn co-star will unleash upon the world. Some sources, as we reported earlier, are saying that Robert is already tired of being mad and ready to reconcile; some people are even saying that he’s ready to just get over this little speed bump and get back together with Kristen.

Regardless of what’s being reported, it’s quite clear that Kristen is freaking out over what R-Patz will say in his upcoming interviews, one of which being with funny-man Jon Stewart, who definitely will not let this topic go untouched. Kristen is hurting and, while she’s always been one to take a joke, she’s not quite in the mood at the moment. #HeartAche #Tears.

A source for Radar Online says, “Kristin is very, very nervous about Robert’s interview with Jon Stewart on Monday. She’s confident that Robert, who has always been such a private person about his personal life, will keep quiet over the cheating scandal.But she does have some concerns that [Jon] Stewart might poke fun at the situation in an attempt to get Robert to open up.”

Robert Pattinson has several upcoming interview slots scheduled including, in addition to Stewart, Good Morning America (August 15th) and Jimmy Kimmel (August 22nd). Regardless of what Robert Pattinson chooses to do on these talk shows, we hope he doesn’t try and “get back” at Kristen for what she did to him by totally throwing her under the bus. My gut tells us that Robert won’t do anything mean, as he seems like a fairly classy dude — a classy dude who was, don’t get me wrong, completely pissed that she cheated . . . but he’s had some time to simmer down now. Dear R-Pattz, think rational thoughts, rational thoughts, rational thoughts.

You know what they say, folks . . . Hell hath no fury like a sparkly-vampire-from-a-multi-million-dollar-franchise scorned. Or something like that. Y’all have anything to say while on the topic of the Kristen Stewart and Rupert Sanders Affair?