Robert Pattinson Done Crying, May Get Back Together With Kristen Stewart 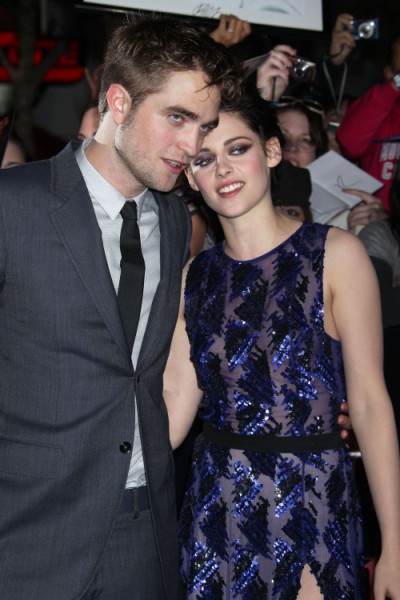 Well, he gave single life a good three-week chance and watched as the whole world put its collective foot down on Kristen Stewart, but sources say Robert Pattinson has dried his tears and is ready to move on… with Kristen securely in tow.

Or maybe not so fast? Radar Online reports Rob’s constantly wavering in what to do with his cheating ex. His close friends are helpful but also not much help at all. Some are telling him to stay away from the Trampire whereas others are of the everybody makes mistakes variety. Poor dude’s head is probably spinning.

“Rob was super angry for the first couple of weeks. Angry at Kristen for ruining what they had, angry at her for the public embarrassment, angry at Rupert [Sanders],” the source revealed. “But he’s starting to wind down and really think about what he’s going to do regarding his relationship with Kristen. He goes back and forth…There’s definitely some friends who think he should just move on from Kristen, but then there are others who still think Rob and Kristen really have a special connection and want him to give her another chance. He has a lot to think about and hasn’t decided either way right now. Rob’s always been a bit of an awkward nervous guy, but his appearances in New York next week have him frazzled. He’s keen on promoting his new movie, but he really doesn’t want to address his personal life or the cheating scandal because he’s just not ready yet and doesn’t want to say anything he’d regret.”

Suffice it to say Rob’s got a lot going on. I still can’t decide if this dubious exposure is good for Cosmopolis or not. On the one hand, the movie didn’t get great reviews at Cannes so this attention could help it get more people in the seats. On the other hand, don’t Rob fans usually camp out at all his movies however bad they are? Twilight movies make trillions! Nevertheless, emotionally, Kristen’s shenanigans couldn’t have come at a worse time. Cosmopolis was supposed to be his test at real acting and break him from his sparkly vampire shackles, but instead all anyone can talk about is Bella and Edward, I mean Kristen and Rob.

Rob shouldn’t even be thinking about his relationship with Kristen. He should be focusing on his career. I’m sure Kristen’s hounding him day and night for an answer. Girls, am I wrong? When we’ve done something sh-tty and threaten a relationship we can’t just sit around and wait. We need to know where we stand NOW. Guys can hang. They can think on it. They can get wasted with their friends and zone out for awhile. A woman’s mind doesn’t work that way. So although it annoys me that Kristen is on Rob’s ass for an answer and begging for forgiveness while his professional life is in need of his full attention, I understand it at least. Kristen won’t rest until she has her answer. Hell, she won’t show her face. She’s dropping out of appearances and movies left and right. But Rob doesn’t have that luxury. His post-Twilight career isn’t as solid as Kristen’s. He needs to promote Cosmopolis. It has to do respectably. If not, his career could be over fast and I’d hate to think Kristen had something to do with that. Obviously, it was never her intention, but if his head’s not on straight during these upcoming interviews and red carpets he could miss an opportunity to dazzle. And, if nothing else, he’s good at dazzling.