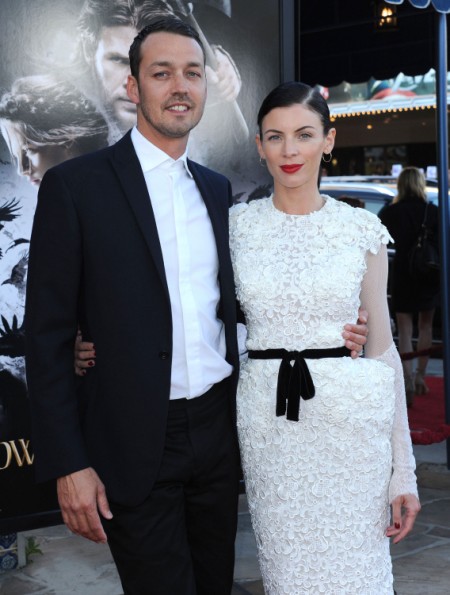 It appears a reconciliation isn’t in the cards for Kristen Stewart’s clandestine booty call, Rupert Sanders, and his wife Liberty Ross.

Despite reports from TMZ that the couple has been to marriage and family counseling since pictures surfaced of Rupert rubbing his lips and pelvis all over his Snow White star, sources now say Liberty is not only hell bent on leaving Rupert but she’s intent on leaving the whole damn country as well.

A source told The People: ‘Liberty plans to mediate this out of court in a swift and efficient way, for the sake of her children. She just wants a clean break. She and Rupert have met with a mediator and are working things out in a civil manner. She’s ­suffered enough.’

Liberty, 33, has allegedly vowed to return to the UK with their two children Skyla, seven, and Tennyson, five, having originally moved to Los Angeles in a bid to boost Sanders’ movie career several years ago.

The insider continued: ‘She only moved to the States to support Rupert and his career. She has no strong ties in the US nor does she want to remain here. She has made it clear that she wants to move back to the UK with her children.’

Although Liberty does not want to prevent her children from seeing their dad, she no longer feels the need to live apart from her family across the pond.

The source added: ‘Given that the majority of her family and friends are in the UK, nothing is holding her here and the kids are young enough to start a new school and not be affected.’

Apparently Rupert walking around with his wedding ring on didn’t touch on Liberty’s heartstrings. Perhaps the giant cross necklace she’s been sporting wasn’t just to ward off the Trampire Kristen? Regardless, this is a HUGE decision. Liberty and Rupert have children. I think a lot of us expected her to take him back. I’d love to say good for her for sticking her ground but I can’t celebrate a family breaking up despite my desire for Rupert to get his comeuppance.

And I hate to bring everything back to Kristen but she’s got to feel like extra sh-t today, right? Now she knows she was half of the cause of a family’s demise. It wasn’t all her fault obviously but still… can’t feel great about that. Kids living an ocean away from their father? Ya, that’s not ideal for anyone.

So now we’ve got one answer. Liberty Ross is divorcing Rupert Sanders (if you believe Metro). That’s one relationship down. Now it’s up to Robert Pattinson. Will he strike a hard line like Liberty? It’s still up in the air but he’s been wobbling. I have a feeling he’ll eventually cave. That’s not to say they’ll be together forever but I do think he’ll give her another chance. And then how do you feel when you’re Kristen Stewart? You cheat and break up a marriage and family but yours stays in tact.

What’s the better scenario for a conscience – knowing you helped break up a family as well as your own high profile relationship with the love of your life (so far), or always having the constant reminder of your betrayal around because the man you cheated on decided to stay with you? That’s a tough one.