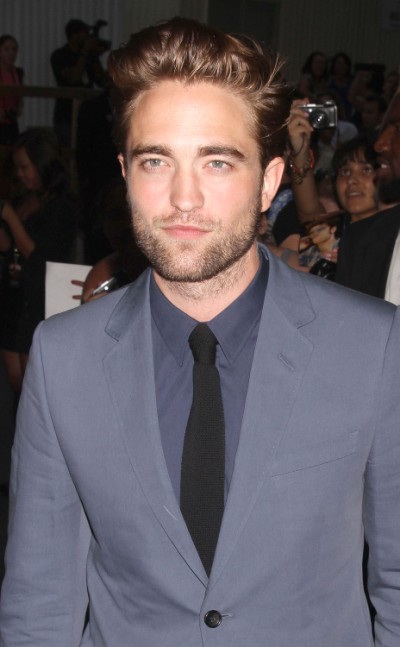 We all can agree that John Stewart went easy on Robert Pattinson. The Daily Show was his first interview since the Kristen Stewart scandal broke so we all knew John wouldn’t throw anything too hot at the fragile star. But that was just the warm up for Robert. Good Morning America’s live interview tomorrow morning reportedly has no restrictions. Rob and his people agreed to it which leads me to believe Rob could finally be ready to talk about how his life has flipped upside down over the past three weeks.

Or he could just talk about Cosmopolis and graciously refuse to answer Kristen Stewart questions. Because we all know he’s going to get them and George Stephanopoulos isn’t going to dish out ice cream beforehand. It would be kind of cute if he did though. I’ve said before George should be the one to do the interview. He had Paul Giamatti in the hot seat today which makes me think it’s a done deal. George won’t get too personal. I’m sure his producers are on his ass about asking the scandal questions, so he knows he has to deliver, but George will do it in a kind way. This is one of the only guys I’ve seen go toe-to-toe with the Ragin’ Cagin’ himself, James Carville, but I can’t see him holding Robert’s eyes as he asks how it feels to know his girlfriend made the beast with two backs in a mini cooper. This is one of those times I know the interviewer will be just as nervous as the interviewee.

So why did Rob agree to do it? I’m not sure. GMA has mass appeal and Rob’s been a pro about getting people in the seats to see Cosmopolis. Maybe he’s doing a solid for his director. David Cronenberg had enough faith to cast the sparkly vampire in his vision and Rob wants to repay the favor. Unfortunately he’s paying with his dignity but he has Kristen Stewart to thank for that. Or maybe he’s just ready to confront Kristen and the rumors. He’s played nice with her so far. He hasn’t bashed her and hasn’t even mentioned her name. She’s lucky he’s such a gentleman and didn’t take a page out of Brandi Glanville’s book. I can’t see Rob saying anything negative about Kristen. I just can’t. If he does then that will take everything away from Cosmopolis and Rob loves that movie too much. But odder things have happened to people at their breaking point. It’s live and Rob gets flustered. It’s definitely worth tuning in for if you have the time. And if you don’t, be sure to come back here. I’ll be recapping it live for all our lovely and inquisitive readers!

Do you think GMA will go harder on Robert Pattinson? GMA likes to think it’s full of journalistic integrity so I have no doubt they’ll try. But the question is will Rob play along? Is it time he put the Kristen rumors to bed or should he keep staying mum?

Just as I suspected George Stephanopoulos is the interviewer! Good decision from Rob’s camp!

And also just as we suspected, Rob Pattinson is pleading the fifth! So boring but so understandable, right? He tells George, “I’ve never been interested in trying to sell my personal life,” and adds, “You get into [this business] to do movies. That’s the only way to do it. And so, you know, that’s the reason you go on TV is to promote movies.”

So he’s basically saying, stay away from my private life, I’m not going there. Fine!

And George is so cute! I told you it would be adorable if he gave Rob ice cream but he did one better. He got him cereal! I’m loving this! Cinnamon Toast Crunch is apparently his favorite.

Naturally, George had to go there and ask the obligatory questions. He got the “How are you doing” and “what do you want your fans to know about what’s going on in your personal life” questions out of the way fast but Rob didn’t give anything away too much. “I like my fans to know… to know that Cinnamon Toast Crunch has only 30 calories a bowl.”

Way to deflect Rob. I don’t think that’s true? If it was I would eat it every morning!

Oh, George is trying to pry without really prying! He asks if Rob can ever get used to the media. Rob says, “If you start getting used to it, it means you’re going crazy. It’s nice. It’s like being on the craziest theme park ride. It’s exciting but eventually you have to have a break.”

Good answer. More Cosmopolis, Cosmopolis, Cosmopolis… well that’s why he’s there after all! No mention of Kristen Stewart at all! AHHH! Perhaps this interview wasn’t so off limits as we were led to believe! Or maybe George just had a heart and decided not to go too deep? What do you think?

Rob calls out his fans! “They seem pretty excited about kinda whatever. I live for them.”

That’s sweet of Rob. It leads me to believe he knows they are crazy but appreciates their support right now. That’ll get people to see the movie. Nice PR move.

Bless his heart, George keeps trying. “You seem to be doing OK”, he says. “Yeah.” is all Rob replies.

Right, well that’s all we got out of Rob this time around. George pressed a little but Rob wasn’t budging and wasn’t about to talk about Kristen. But we expected that, right?