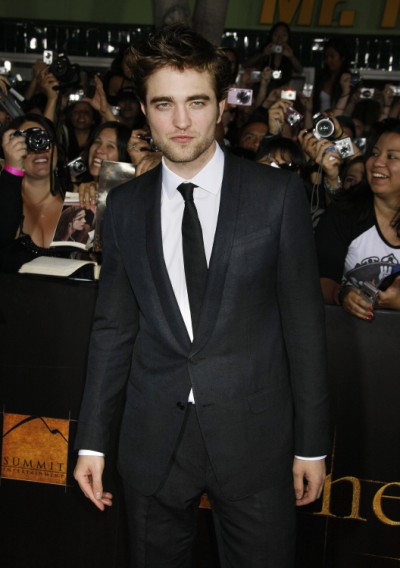 So tonight’s the night. Are you going to be watching The Daily Show with John Stewart? Robert Pattinson is finally breaking his silence! This is the first time the majority of us have seen or heard him since Kristen Stewart’s cheating scandal broke three weeks ago. In honor of the event, we’ll be doing a live recap that will begin at 11 EST. Be sure to come back! Don’t miss this!

Sure, Rob’s making The Daily Show appearance to promote his new movie, Cosmopolis, and I truly appreciate his professionalism, but you know all we want to hear about is Kristen. Oh, and we want to judge what he looks like. Don’t lift your eyebrows at me! You do too! Is he skinnier? Has he bathed? Are his eyes blood shot? These are all the clues we’re going to look for to surmise just how rocky his life has been this last month.

And then there are his mannerisms. Is he fidgeting too much? Is he looking John in the eyes? Is he embarrassed? Shy? Angry? Bitter?

And then there are the questions! Will John throw softballs the entire segment or will he give Robert some curves? I haven’t heard if Robert’s people have nixed Kristen or Twilight from the discussion. I can’t see Stewart getting too crafty or pry too much. John’s a dude and he’s a cool dude. He’s heard all the stories and The Daily Show is the first to snag Robert. Why return a favor by giving an uncomfortable interview? Rob scratched John’s back by agreeing to be on the show now John should scratch his back by keeping the interview easy, fun and on point. That’s what John’s good at. He’s a comedian. Hopefully he’ll call out the 800-pound pink gorilla in the room right away, get it over with so everyone can take a breath, and then move on to the movie. That would be my game plan.

I’m also anxious to hear how the audience responds to Rob. John’s fans aren’t necessarily of the Twilight variety but everyone who doesn’t live under a boulder knows what’s been going on with Rob and Kristen. When it embraces him, and you know it will, how will he respond? Grateful? Embarrassed? Uncomfortable? My guess is uncomfortable. Rob can’t appreciate the crowd’s support without in some way acknowledging Kristen’s actions. This will be VERY interesting and I’m not missing a minute. So be sure to stop by later. I’ll give my play by play synopsis of the event! Hopefully it’s a good time and Robert can shake that monkey off his back after finally getting out and showing his face and rest easier.

And here we go!

Nice, John brings up the Kristen scandal right away wondering what Rob will say about the… Olympics! Hilarious.

I’m going to wait until Rob actually comes on now so enjoy the political commentary!

And here comes Rob. Juliet Binoche is so beautiful. I swear she never ages.

So cute. I can’t stop smiling. They’re eating ice cream together! Rob calls out the meeting for being awkward but this is clearly prepared and adorable. Thanks John Stewart!

Rob wears spanx. Rob admits he didn’t hire a publicist so he doesn’t know how to deal with awkward interviews. Panel is full of giggles.

He calls the show the Twilight show!  He keeps eating the ice cream!

John says “bad break up” and “boy you are better off, kick her to the curb”. Rob laughed. Not weird at all. No, honestly, really not weird.

OK, now on to Cosmopolis. Look at the twinkle in Rob’s eye. He looks happy. Either Rob’s a better actor than I thought or he’s enjoying himself. Blah Blah Blah Cronenberg and Cosmopolis.

Rob’s asking Twilight fans to come out to make Cosmopolis bigger than The Dark Knight Rises.

And it’s over! Too fast!

OK, let’s talk about it. I’m actually shocked. I didn’t think Rob would look like sh-t or anything but I’m surprised by how amazing he did. I’m ready scrap the “Rob’s heartbroken over Kristen Stewart” stories from here on out. I haven’t been this attracted to Rob since the first Twilight. He looked gorgeous!

He didn’t back down. There weren’t any awkward silences. If anything, there were too many giggles. Stewart obviously protected him and drove the conversation but, in his defense, he didn’t hesitate from discussing the scandal. Stewart brought the break up up a few times and Rob seemed OK with it. Rob didn’t say much but he didn’t ignore it either.

Maybe he doesn’t need a publicist after all! What did you all think? I give Rob an A. Welcome back to the living Robert Pattinson!