Kristen Stewart Wants Robert Pattinson Back In Her Arms Tonight 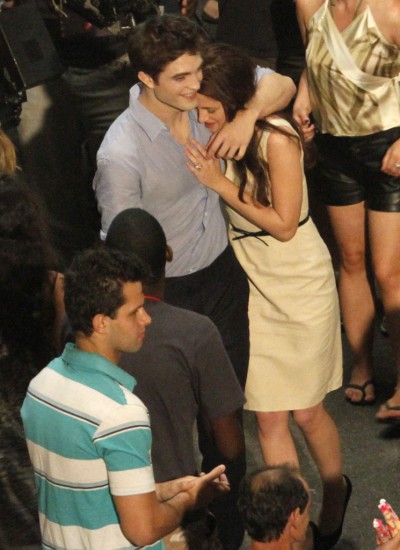 So Robert Pattinson faced his demons yesterday and came out looking quite amazing actually. On The Daily Show with John Stewart he was warm, engaged, witty and seemingly happy. I think he read my Hugh Grant post to ready himself for his first foray back into the spotlight. If we all didn’t know any better, we’d assume he was so over the Trampire… oh, but we know better. Kristen Stewart does too. According to Female First magazine Kristen’s not letting up without a fight – or at least a face to face – and unfortunately Rob has finally agreed to meet her.

A source told heat magazine: “Rob needed time to deal with his huge shock and upset, but he’s agreed to face her. He’s back in LA [to promote his new film ‘Cosmopolis’]. Now he has all his friends around him, he’s started feeling stronger.

“He’s incredibly hurt, but he still cares about Kristen and is actually worried about how upset she has been. A reconciliation is not on the cards, but they both know they need to thrash things out.”

Let’s be supportive shall we? Closure is good. If you don’t have closure you become the 40-year-old housewife in Iowa who facebooks her high school boyfriend because she just wants to “catch up”. Rob needs to see Kristen. He needs to know he can be around her without wanting to tear his fingernails out. I think he can handle it. You? After what I saw last night I think Rob can do the Twilight publicity blitz in November without a tear in sight. Kristen, on the other hand, I’m not so sure. She can’t control the emotions on her face. When she’s annoyed, you see it. When she’s nervous you feel it. And when she’s uncomfortable she knocks over everything within a mile radius.

Now, I still believe a reconciliation is in the cards. Like I’ve always said, Rob does love Kristen. I think he has since the moment they met during casting and had that amazing chemistry Catherine Hardwicke continues to talk about in every interview she ever gives. He won’t be able to stand the fact that she’s in pain and will probably do everything he can to help her through the promotional tour – even get back with her.

I’m guessing Rob’s John Stewart interview was harder for Kristen than it was for Rob. If this was the first time she’s seen him, like us, she had to have been surprised by how well he did. Now, obviously she knows him better than we do. Maybe she picked up on some tells we never would have thought of but I can’t imagine she watched the segment without thinking “Damn he looks good. What the f-ck did I do!” So now she’s scrambling. She wants to meet. Meeting Rob is her only hope. Rob can be strong from a distance but even Superman had his kryptonite. That’s why I know they’ll get back together. Kristen will make sure of it. They’ll have make up sex and think everything’s solved. But we all know that’s the easy part. Anyone can forgive. It’s the forgetting part that’s the b-tch.

Do you think it’s smart for Rob to meet Kristen so soon? Will she use her feminine wiles to lure him back in? Is that such a bad thing?