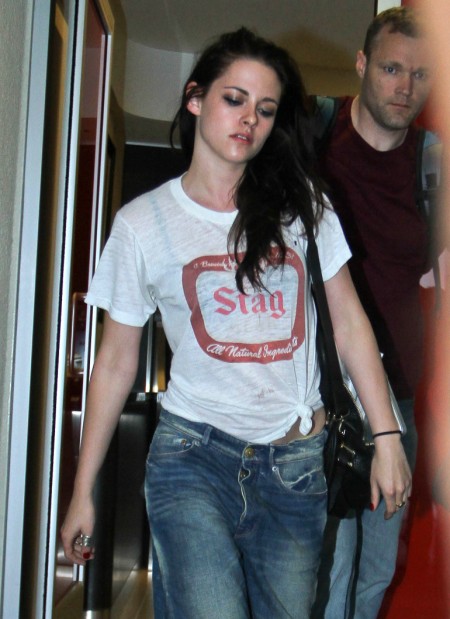 Another day, another canceled event for Kristen Stewart. The MTV Video Music Awards will have to settle with Robert Pattinson because Kristen has bailed. The Mirror explained that Kristen and Robert were supposed to show up together next month but she’s decided to go to the Toronto Film Festival instead to promote On the Road. This would have been the first public appearance the scandalous pair made since Kristen’s booty call seen round the world.

Oh, come on Kristen! You have to come out with Rob sooner or later! I feel sorry for all you Twihards who keep praying to your Edward and Bella dolls every night for a reconciliation for Rob and Kristen. News like this doesn’t bode well. The studios must be p-ssed too. Doing an MTV awards show before a Twilight film releases is good for business. Your stars being too scared to be in the same venue together – not good for business. It’s not like Twilight’s going to be a flop or anything but still… solidarity on the last film would have been nice.

Maybe Kristen’s reluctance to come out of her hiding hole could have more to do with vanity. Apparently, homegirl ain’t looking so hot lately. The National Enquirer (via Celebitchy) has a timely analysis of Kristen’s break up diet. Doesn’t seem so bad. It kind of just sounds like she’s an incredibly successful model.

Heartbroken and ashamed over her scandalous affair, Kristen Stewart has virtually stopped eating and is basically “living on” a dangerous diet of Red Bull and cigarettes, say sources. Friends are horrified at Kristen’s gaunt appearance and fear for her health as she apparently punishes herself for betraying Robert Pattinson.

“Kristen is a nervous wreck and existing on a diet of cigarettes, sugar-free Red Bull and the occasional bag of potato chips,” revealed an insider. “She’s been hiding out at the LA home of a producer friend and is looking pale and worn-out. Whenever anyone tries to push her to eat even a small bowl of soup, she either claims that she’s just had something, which isn’t true, or that she’s nauseous and there’s no chance of keeping anything down.”

“Kristen is grief-stricken and has hit rock-bottom. In many ways, Kristen living off cigs and Red Bull is a way of punishing herself.” Kristen has also refused friends’ pleas to see a therapist, said the source, adding: “Part of her just doesn’t want to feel better.”

I could see Kristen being extreme like this. We’ve all been there. Sometimes you just want to feel like sh-t. And Kristen’s never struck me as a bastion of health anyway. She always has that hung over/I haven’t eaten a leafy green in weeks look. Someone should call Cher. Kristen’s in desperate need of a good slap across the face and a “Snap out of it!” Moonstruck for all you kiddies. Classic. Rent it!

At this point Kristen’s pity party isn’t hurting anybody but herself. Rob’s moving on and doing his thing. I’m sure looking like Kate Moss without make-up or soft lighting won’t bring him back. I’m glad she’s doing TIFF though. She needs to show the world she’s still alive and a real person, not a punch line. It won’t be easy. She’ll get ripped on a little while longer but no reporter is going to tear her up to her face. But she has to come out first. Hiding only drags all this nonsense out.

What do you think about Kristen’s decision to ditch the MTV awards? It’s not like Twilight needs the exposure. Do you think she just wanted to promote On the Road more or is she just afraid to be around Twilight fans and Robert at the same time?