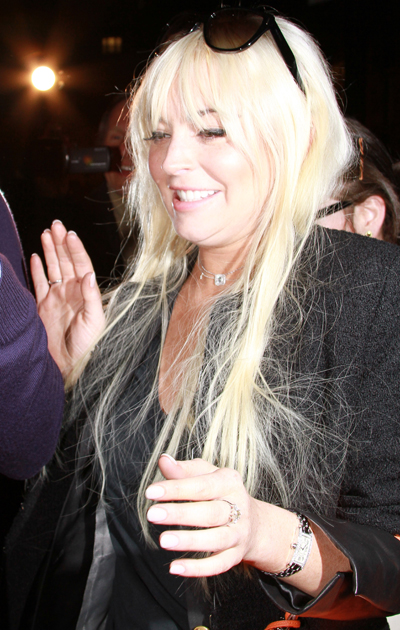 Lindsay Lohan may have had a lot of dates in court this past year, but evidently her love life is in a bit of slump! According to RadarOnline, the 25-year-old tabloid star has set her sites on none other than 46-year-old controversial fashion photographer Terry Richardson, whom she reportedly had a “steamy hookup” with earlier this year at the Chateau Marmont in LA.

If you remember, Terry is the photographer whose reputation has been defined by numerous young women/models who’ve come forward and claimed that he manipulated them into posing for sexually humiliating photos. Reportedly, even Vogue model Coco Rocha refuses to work with him again because of his antics.

Surprisingly, Lindsay supposedly thinks dating Terry could actually help her career and has reportedly been throwing herself at him. Related: Debbie Harry Mistaken For Lindsay Lohan…Yikes!

“Lindsay and Terry have been friends for years,” said a source to RadarOnline. “And she’s always had a thing for him. Lindsay thinks he’s really cool and hip and could be great for her career.

“They had a major night of passion after they worked on this photo shoot together and now she’s going all out to get her claws into him. But Terry is just not interested in pursuing a relationship with Lindsay and totally regrets hooking up with her.

“Lindsay has been texting and phoning him nonstop and he’s actually kind of freaked out by how strong she’s been coming on to him; it’s all pretty unseemly. As Terry said, there’s nothing more unattractive than a desperate woman. It’s a difficult situation though as they move in the same circles and have a lot of mutual friends. He’s trying to work out a way to let her down gently without blowing their friendship.“

Terry reportedly also has a “lady friend” named Audrey Gelman that he spends a lot of time with, so it seems Lindsay will have to find some other sketchy older guy to pin her romantic hopes on.