Is Miley Cyrus Now An Anorexic With A Nose Ring? (Photo) 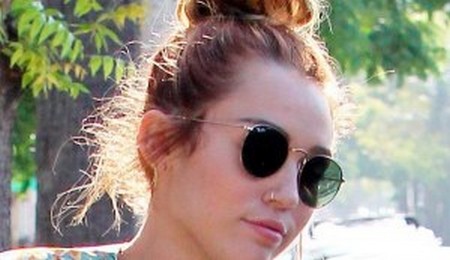 Since Miley Cyrus has finally realized that her prospects of being an adult A-lister are minimal she has found a new pursuit.  Miley is now an obsessive dieter and exerciser with a nose ring.  Like many women who perceive that they lack control over their own destiny, Miley has adopted an eating disorder.  She combines this with so much exercise that the formerly healthy-looking girlfriend of The Hunger Games’ Liam Hemsworth is now too skinny.

What do we mean by too skinny?  We mean that Miley is now under 100 pounds at 5’4” – that is what we mean.  In fact a sports medicine expert says that Miley is underweight and overtrained. Miley simply must be in the spotlight and the fact that her extremely attractive man is becoming more famous than her is more than she can take.  Whether it’s a diamond ring on Twitter, penis cakes, or snide remarks to Liam’s talented co-star Jennifer Lawrence, Miley continues to show that she can’t deal with being a has-been.

As Miley Cyrus left the Winsor Pilates studio in Hollywood on April 27, onlookers couldn’t believe that the pin-thin woman with rock-hard abs was once a chubby-cheeked tween idol. “She looks so skinny!” a passerby tells In Touch of the 19-year-old, who works out in private sessions at the studio of Pilates guru Mari Winsor nearly every days. “She looks like a completely different person.”

Indeed, Miley has been wasting away since she traded her beloved burgers and potato chips for salads, and embarked on an extreme fitness routine that would put even Madonna to shame. Although she insisted on Twitter that a gluten-free diet was to blame for her shocking weight loss, insiders say Miley vowed to slim down for a Hawaiian vacation with her boyfriend, Liam Hemsworth, in December. She has now gone above and beyond her goals, having dropped 20 pounds from her already tiny frame, believes private trainer Thomas Johnson of Santa Monica Sports Medicine. “Miley is now underweight at 100 pounds,” Johnson tells In Touch of the 5’4? star.

But she isn’t stopping. On top of her Pilates regimen, Miley has been jogging and biking with her dog, Floyd, around her Touluca lake, Calif., neighborhood, and even enlisted the help of celebrity trainer Harvey Pasternak to further whittle her waist. With so much physical activity and not enough eating, Johnson fears she’s gone overboard. “She is likely overtraining,” he explains, “which can increase her chances of depression and hypertension.”

While she tells friends she feels better than ever — “health is happiness,” she recently raved — perhaps she should remember that most men love curves. Relax and eat a pizza, Miley!

Does Miley have an eating and/or exercise disorder?  Or is she just trying to do something to look and feel better?  Let us know what you think in the comments below.