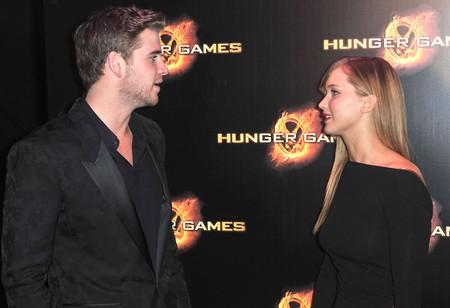 Could this be why Miley Cyrus has taken to working out twice a day? Is she trying to burn off her jealousy over boyfriend Liam Hemsworth and his The Hunger Games co-star, Jennifer Lawrence?

Could be true. Sources say the relationship between Miley and the new It girl, Lawrence, have become “frosty” ever since Miley deigned to give Lawrence free advice on her new fame. Needless to say, Miley wasn’t amused when Jen said thanks but no thanks to Miley’s friendly advice.

“So Miley got the shock of her life when Jen told her to mind her own business,” a source confirmed to Now. “Now it’s pretty much all-out war.”

The Disney Queen has been in the game a while and has made millions off her successful alter ego, Hannah Montana, but Lawrence isn’t exactly the new girl on campus. The 22-year-old has been acting for the past four years and even scored an Oscar nom in last year’s haunting, Winter’s Bone.

Besides, Lawrence has serious acting talent whereas Miley is nothing more than a former child star.  I mean what has Miley ever done in the way of acting that has received critical acclaim?  So why should Lawrence accept Miley’s condescension – right – she shouldn’t and she didn’t!

Where is Liam in all this you say? Well, the inconsiderate Australian cutie won’t shut his trap about how fun it was to work on set with Lawrence. You’ll remember, Miley met and fell in love with Liam on set of their movie, The Last Song, in 2010 so she might not take too kindly to Liam’s tales of a bigger, better, blockbuster experience. And we’ve got at least two more Hunger Games movies left to film.

I have no doubt Miley’s suffering some bruised ego at the moment. She’s used to being the big name but now even virtually unknown Hemsworth is taking top billing. If it wasn’t for her recent health fixation/exploration/obsession, I don’t think many people would even be talking about her. Makes you question her reasons for all that gym time. Is it an eating disorder like some think or could Miley have figured out how to stay in the papers without getting acting roles?

As for Jen, I think she probably did tell Miley to butt out in her sarcastic, blunt manner. But she’s definitely not after Miley’s man. Lawrence has been dating her X-Men co-star, Nicholas Hoult, for the past year and the couple has been seen making out in public recently so I’m guessing their still solid.

I think Miley needs a job. What about you? I come up with crazy scenarios in my head when I’m bored too. AND I think she needs to stop sniffing the Hardee’s bag and eat the damn hamburger. That will make her much happier.