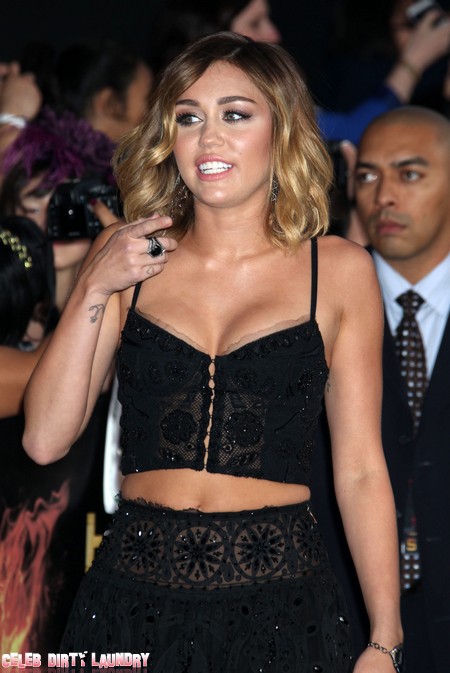 Miley Cyrus has gone too far with her ‘look at me’ campaign and is now an official Twitter nuisance.  From her over-sexed pics to her marijuana club affiliation and now with her ‘engagement’ ring, Miley shows that she will go to any lengths for attention.

Lisa tells it like it is: Kats a little help please… you know I say it all the time, “do need go on Twitter and imply things, just come straight out and say it”.  I am talking about Miley Cyrus going on and tweeting and asking everyone, “what do people think of her new manicure?”, meanwhile showing a big ole solitary ring on her ring finger.

Miley has been dating that (yummy!) guy, Liam Hemsworth 22,  from the movie “Hunger Games” for about 2 years now. They have talked about marriage but nothing official has ever been said.  Maybe it’s a good thing that she has been dating him for a while because I think this movie is going blow up big time.  I see a trilogy for this series kind of like the Harry Potter movies which will make all of them connected to that movie into a big star.

Miley now a little side note for you – you need to tone it down a little.  You are going straight from girl from Disney movies to, well, we really don’t know.  Miley is 19 years old now but she is keeping it way too sexual from clothes to her songs, of late.

I think that people are a little confused.  Miley has gone from girl next door to girl out the door.

Now she and Liam are going to be in the public a lot promoting that new movie and girls are going to be throwing themselves at him, so Miley might want to get it together.  Stop tweeting and starting the rumor mills, there is going to be enough of that on its own.  Congrats Liam on the movie’s success.

Is Miley Cyrus obnoxious?  What do you think?  Let us know in the comments below.