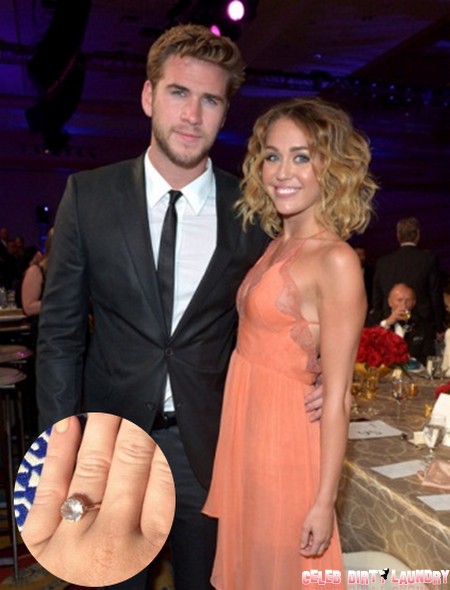 Miley Cyrus shows off her new ring, as if it were an engagement ring, as she flaunted the rock last night while out with Liam Hemsworth.   Is Miley trying to tell us something – or is the message for Jennifer Lawrence and all the other women out there…

Miley and Liam attended a charity event last night hosted by boxing legend, Muhammad Ali, and she made sure everyone saw her mystery ring.  Earlier last week Miley tweeted a photo of the now notorious ring and the implication appeared to be engagement and marriage – although the actual tweet was rather harmless.

She claimed to have been showing her 5 million+ Twitter followers her new “manicure,” but let’s be honest here, people. One doesn’t simply post a pic of their blinged-out RING finger without expecting to receive some attention.

On the topic of her nails, she tweeted:  I am soooo obsessed with @jennahipp nail foundations! It looks so chic and classic!

She then continued with the following:  I’m sitting here with 3 dogs who love me unconditionally, a beautiful boyfriend, an amazing family, & 5.2m lovely followers

TMZ Reports:  Miley Cyrus is continuing to flame the engagement rumor flames by once again sporting a very engagement-y long ring while out last night with boyfriend Liam Hemsworth at a charity event hosted by Muhammad Ali.

Miley tweeted a photo of the ring earlier this week, but made no mention of it directly, sparking people to wonder if the wild child and the “Hunger Games” star were planning on getting hitched in the near future.

So with Miley leaving the ring’s significance to our imagination, we gotta ask …

Is Miley engaged?  Or is she just teasing us?  Perhaps she is just trying to warn all girls that Liam is hers exclusively?  Has she told Liam?  Let us know what you think in the comments below.