Miley Cyrus Has A New Giant Diamond Ring: Are Her And Liam Hemsworth Engaged To Get Hitched (Photo)? 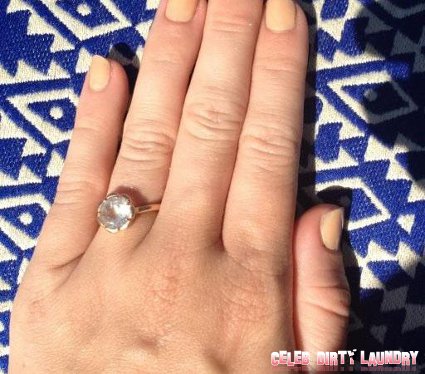 Recently, Miley Cyrus tweeted a picture of her hand, which was decorated with a pretty fabulous — and gigantic — diamond ring. The actress/singer set off lots of people’s alarms yesterday when she posted the above picture. She claimed to have been showing her 5 million+ twitter followers her new “manicure,” but let’s be honest here, people. One doesn’t simply post a pic of their blinged-out RING finger without expecting to receive some attention.

On the topic of her nails, she tweeted:

I am soooo obsessed with @jennahipp nail foundations! It looks so chic and classic!

She then continued with the following:

The blase nature of the aforementioned tweets suggest that boyfriend Liam Hemsworth hasn’t yet popped the question, but you never know. Just recently Jennifer Lopez denied the rumor that she and boy-toy Casper Smart were getting married, only to embark upon a super secret wedding journey a week or so later.

Could there be a wedding in Miley and Liam’s future? Guess we’ll just have to wait and see.

For some reason, I think there might be. Engaged or not engaged . . . May The Odds Be Ever In Their Favor. Get it? Hunger Games joke.