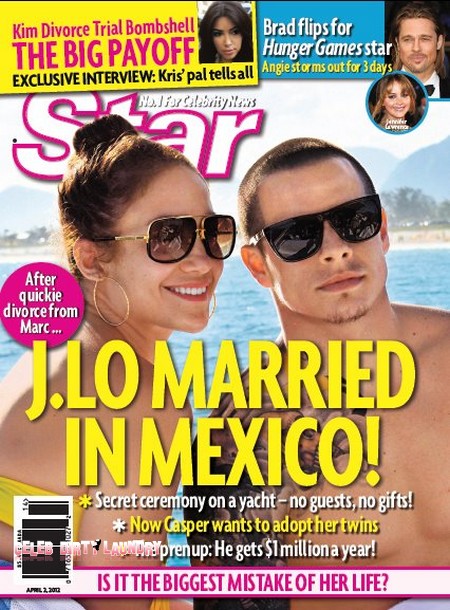 Jennifer Lopez marries toyboy Casper Smart in a secret ceremony aboard a yacht in Mexico – yes, you read correctly! The ceremony includes no guests and no gifts as Jennifer rushes in and makes the biggest mistake of her life.  Now Casper wants to adopt her twins – which should send J.Lo’s ex, Marc Anthony, completely off his brain!  Furthermore the couple, who are often mistaken for mother and son, signed a prenup giving the little gigolo a cool $1 million per year for the next decade – and they say money can’t buy love.  What’s the difference between marriage and prostitution?  Don’t ask Jennifer Lopez for the answer to that question…

The April 2 issue of Star mag features the cover story above with evidence from the following sources.  “Everyone in Jennifer’s inner circle thinks she’s lost her mind,” a source says. “Her mom, Guadalupe, flat out told her that marrying Casper will be the biggest mistake of her life!”

But Jen is determined to wed Casper, 24. Wedding plans are already underway, and even designer Roberto Cavalli tweeted he’s prepping for the big day.

“Today, Jennifer Lopez. Call me…She ask me. To create a special dress. For her next wedding!” he wrote on March 12. (Although his rep later claimed that someone hacked into his account and tweeted the statement, there were no other impostor tweets from the alleged hacker.)

“Jennifer called her mom, sister and a few trusted friends from Acapulco…She said that she and Casper decided to get married in Mexico. Her mom…thought they had eloped, but Jen just laughed and said it was only a matter of time.”

“Jennifer’s gut is telling her that Casper is marriage material,” a source reveals. “And there’s no talking her out of something once she sets her mind on it.”

Hollywood is the new Sodom and Gomorra – but with Ferraris instead of camels.  Can J.Lo be that much of a cretin that she would marry a loser like Casper?  Let us know what you think in the comments below.