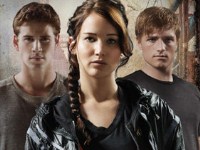 If you are obsessed with The Hunger Games franchise like myself, you’ll be ecstatic to hear that MTV has provided us with more questions and answers from our favorite stars.   We asked the questions – and Josh Hutcherson, Jennifer Lawrence, and Liam Hemsworth answered them as promised.

On Wednesday MTV showed pictures from the Q&A, and now we can find out what they had to say.  The questions were posed via twitter (good lord how I love that social media tool), with all 3 actors opening up honestly on their thoughts and experiences while filming the highly anticipated film.

After one fan asked which actor is most like their character, both Jennifer and Josh immediately agreed that it is Josh is who exactly like his character Peeta.

Jennifer said:  “Josh is Peeta, he’s charming, he’s nice, he’s very real and down to earth, he’s not fake in any way. He just can charm anyone and anything.”

Josh admitted that he was desperate for the role of Peeta:  “I have literally never read a character, book or script or anything that has a character in it I connected with more than Peeta. I feel like so much of who I am is Peeta.”

Let’s all send a big special thanks to the casting directors please. When Liam was asked what the most difficult scene was to film, he said:

“I remember turning up to set the first day and looking out at the few hundred extras there — it looked like a prison camp. It looked so rough and really did look how I think it would be, and it was hot. It was some of the hottest weather I’ve ever shot in. We had extras collapsing because it was so hot out there. That was probably the hardest stuff to shoot for sure.”

As for Jennifer, she cited her many physical scenes – including all the uphill running – as the most difficult.  She said:  “if I’m running up a mountain in a scene, that’s what we shot all day, so by the time we started acting and talking, it was like a vacation.”

At least you get fit girl!  The Hunger Games hits theaters March 23rd!!!