Behind The Scenes on The Hunger Games (Photo) 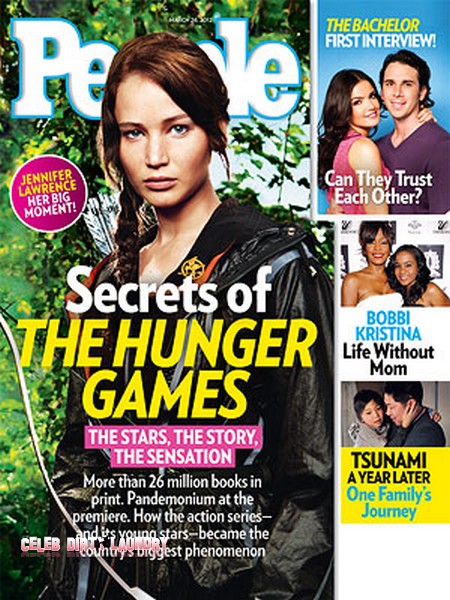 The March 26th, 2012 issue of People Magazine features the cover story ‘Secrets of The Hunger Games.’  With the constant release of new photos and trailers, it’s nearly impossible to escape all the hype surrounding The Hunger Games.  Now as  the film is about to hit theaters March 23rd, 2012 People has all the information on the stars, the story and the sensation.

The fans are ready – but are the stars? “It still hasn’t sunk in,” Jennifer Lawrence, who plays series’ heroine Katniss Everdeen, tells PEOPLE in this week’s cover story.   The 21-year-old actress also shares how she bonded off-set in North Carolina with leading men Josh Hutcherson, 19, and Liam Hemsworth, 22.

“One day we went down to a creek to catch a crawdad, ’cause Liam didn’t know what it was,” recalls Lawrence. “I saw one and was like, ‘Catch it!’ Josh did and it got stuck to his hand. It was a leech! Then we went to Walmart and bought slingshots.”

Adds Lawrence, who also spent time with her cast mates listening to costar Lenny Kravitz play music back at their hotel: “It was like some weird summer camp.”

If you, like me, just can’t get enough Hunger Games news, make sure to check out our special HUNGER GAMES section. We’re always on the look out for awesome new stuff, so if you’re a fan make sure to visit us often to get all the latest News from Panem!   ***. . . May The Odds Be Ever In Your Favor. . .***