Jennifer Lawrence Is Apprehensive About Hearing Her Singing Voice 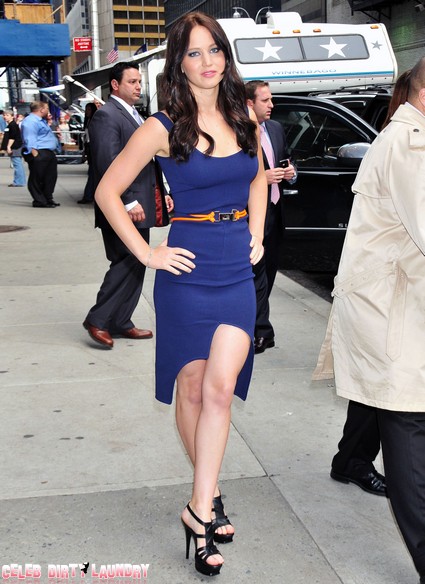 As if Jennifer Lawrence is nervous about her singing in the upcoming and highly (highly) anticipated movie The Hunger Games. Something tells me she’s got the ‘triple threat’ genes going on and she need not worry.

In another part of her sit down interview with MTV which included her co-star Josh Hutcherson, aside from discussing their favorite scenes, Jennifer opened up about her lack of enthusiasm about hearing her voice on screen. If you recall, her character Katniss sings Rue’s lullaby song. When MTV brought up the subject, the young actress became fairly nervous.

She also said that the recording process was with famed producer T-Bone Burnett and it was pretty terrifying.

“T-Bone Burnett, like, the best person to ever happen to music is, like, listening in the other room. I kept getting ready, and then the music would play, and I’d [freak out],” she recalled. “Nothing would come out of my mouth.”

Josh was quick to chime in by saying:  “She’s been called the songbird of her generation,” referencing a Will Ferrell line in “Step Brothers.”

See – how could these two not be together?  Hunger Games hits theatres March 23rd – and so will Jennifer’s songbird of a voice.