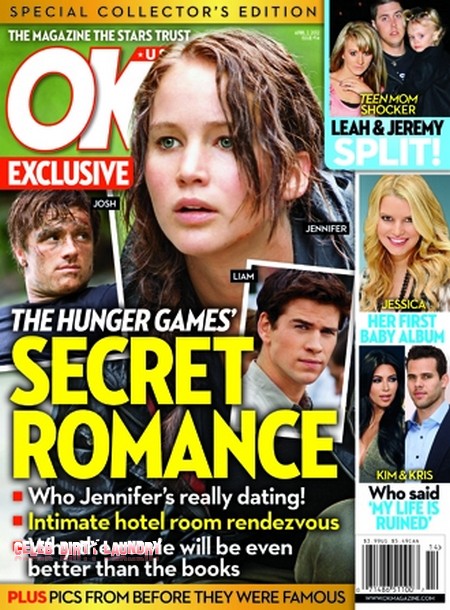 The April 2nd, 2012 issue of OK! Magazine features the cover story ‘The Hunger Games’ Secret Romance.’  With The Hunger Games movie about to hit theaters March 23rd, 2012 the magazine has all the details of a…gasp, secret romance.  They have an exclusive details on who Jennifer Lawrence who plays Katniss Everdeen in the movie is really dating.  Is it Liam Hemsworth or Josh Hutcherson who Jennifer had a secret hotel room rendezvous with?

OK! has more:  During the three-month shoot in North Carolina, the cast members weathered grueling workouts and 14-hour days on the set. “It’s a very physical film.  But the cast was hard-working and wanted to do justice to the characters.”

They even survived stifling heat, humidity — and bugs! “It was like some weird summer camp,” said Jennifer, who plays Katniss, and who got to play hero in real life when someone stepped on a hornets’ nest on the set. “I got stung four times in the face, [but] Jennifer came to the rescue,” says Amandla Stenberg, who plays Rue. “She picked me up and ran to the car!”  However, the hardships were totally worth it.

This week is a special collectors edition of the magazine and the magazine knows why the movie will be even better than the books.  Plus they have pictures of all the Hunger Games stars before they were famous.  I am really excited to see the movie – I will be there Friday night to see the premiere.  I loved the books and I hope the movie can do them justice.  What about you are you excited about seeing The Hunger Games?  Sound out in the comments below.

Also featured in this week’s magazine the magazine knows who said their life is ruined either Kim Kardashian or Kris Humphries.  My guess would be Kim Kardashian that just sounds like her whining.!

To find out all the details on the Hunger Games, who Jennifer Lawrence is dating and more, pick up the current issue of OK! Magazine on stands Thursday!