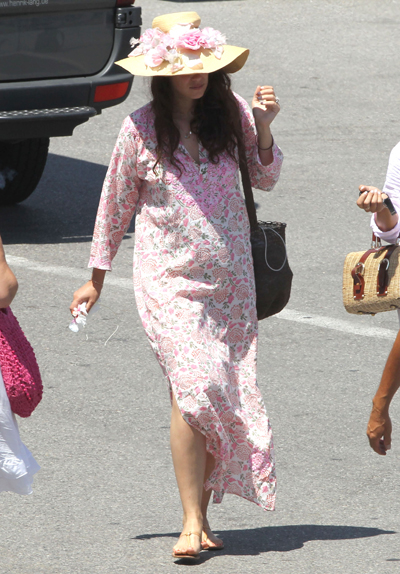 Earlier this month, Italian Vogue reported that 28-year-old Monaco royal Andrea Casiraghi, the nephew of Prince Albert and the grandson of the late Grace Kelly, was engaged to his longtime girlfriend, Colombian heiress Tatiana Santo Domingo, and, now, thanks to some newly released photos of the couple, we have more of an inkling why the couple might have decided to start planning their 2013 wedding: Tatiana is pregnant!

Now, having children out-of-wedlock is not exactly uncommon in this family (Andrea’s aunt, Princess Stephanie, had several kids with her bodyguard and Prince Albert had at least two illegitimate kids himself before marrying Charlene Wittstock last year) but, considering that Andrea is currently second in line to Monaco’s throne, perhaps the young couple thought it would be a wise move to make their relationship official so that their child could later become eligible to the throne.

As it currently stands, if Princess Charlene does end up having a child, then Andrea and his future children would fall much further down the succession list, but the rumored one-time runaway bride doesn’t seem to have the most solid marriage at times, now does she? Related: Princess Charlene Is Depressed At Not Being Able To Get Pregnant

Is it possible that Andrea’s mother, Princess Caroline, urged the couple to get engaged? She was the one to issue the statement, confirming the news after all.