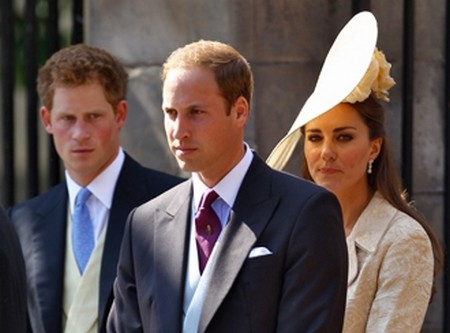 It seems that brotherly bonding has gotten to be a bit much for Kate Middleton and Prince William.  The royal couple need to enjoy some romantic time alone and yet there is Prince Harry, always popping in – and often at the most inconvenient times!  In late March, Harry packed up his belongings and had them transferred from his dad, Prince Charles’ home, over to a one bedroom apartment in the main building of Kensington Palace.

As luck would have it, that move puts Harry just a short walk away from big brother Will’s Nottingham Cottage which is shared with new wife, Kate.  Apparently, Harry has made frequent visits a habit and tends to simply barge in on the couple whenever the mood strikes him.  OK! USA reports:

“Harry’s only been there a few weeks and he’s already driving them nuts,” discloses a close pal. “A few nights ago, he got home late and wanted to sit up and talk over several bottles of beer.”

Kate has tried to be understanding but realizes she is not getting enough of the necessary alone time with her new husband and has put her foot down.  How can Kate be expected to get pregnant when Harry is always in the mix?

“She told Wills he had to do something about his brother.”

Harry has seemed lonely since his split with Chelsea Davy. He’s recently spent time with pop star Mollie King and both Will and Kate are hoping that things turn serious so that Harry has someone else to spend time with.  Harry certainly hasn’t had much luck lately in the love department.  Why do you think that is?  Let us know in the comments below.